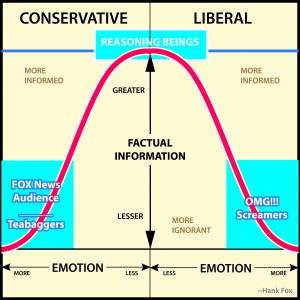 I woke up this morning with this diagram in my head.

I tinkered it up in Illustrator later. Probably could have chosen brighter colors or a better layout, but I got tired of messing with it. You may have to click-and-embiggen it to see all the details.

Especially note that the center vertical bar is labeled to indicate a gradation from Greater Factual Information (More Informed) at the top to Lesser Factual Information (More Ignorant) at the bottom, whereas the center section is labeled (along the bottom) for Lesser Emotion, while the left and right borders indicate More Emotion. In other words, in both the Conservative and Liberal worldviews, you can be more or less informed about issues, and more or less emotional and excitable about them. There are important social and political consequences that flow out of positions in each area of the graphic.

This is based on a great deal of thinking I’ve been doing lately — reflected in several recent posts — about liberal and conservative approaches to certain issues.

Mainly in this diagram, I was thinking that there’s that obvious place (lower left) on the conservative side of the line where people are both uninformed and excitable, the crazies and teabaggers and gunny Christian patriots who form the natural audience of FOX News.

Then there’s that zone up above and to the right of the Foxbaggers, a Platonic Ideal conceptual territory where rational people — Reasoning Beings — can be equally well-informed, and equally calm about certain issues, and yet still trend either conservative or liberal, according to their own personal history and experience. It is in this (sadly not-well-populated) zone that liberal-trending and conservative-trending people can meet and discuss issues calmly, and possibly reach compromise positions.

Interestingly, this is also a place where liberal people who disagree with other liberal people can meet and calmly discuss issues. On the conservative side, conservative-conservative meetings could conceivably take place to iron out differences, but that appears to be politically impossible right at the moment.

Low down on the right, there’s that other space that’s been bringing itself to my attention in recent months, the zone of the strongly liberal, excitable “OMG Screamers.” These people, with whom I would otherwise identify as fellow liberals, have begun to fall outside my fellow feeling because they react with great emotion but little thought. More than once I’ve found myself outside the apparent liberal mainstream on issues such as feminism, race relations, the homeless —  hell, even pit bulls.

I’m much in favor of marijuana legalization, for instance, but I don’t kid myself that young people smoking pot is some sort of wonderful positive end-result. I got into a discussion about feminism a year or so back in which one of the participants declared that no male, however staunchly in favor of women’s rights he might be,  should ever attempt to explain feminism to another man unless a woman was present. Despite my strong feelings about women’s rights, safety and choice, that (and a steady flow of other ridiculous assertions) persuaded me to drop out of the feminist (but not the women’s rights) conversation.

And yet I’m not, and never will be, a conservative. What I am is someone who insists on being liberal — compassionate, thoughtful, open-minded, commitedly non-religious — while at the same time paying close attention to the broader array of facts of each issue, facts that can sometimes lead you to disagree with a loud-voiced, knee-jerk mainstream.

There are people on my side of the line who believe you cannot be both liberal and wrong. Yet if you’re misinformed, if you fail to understand the entire situation, you can be not only wrong but malignantly wrong.

In addition, I’ve become aware — and I hope you have too — that quite a lot of the stuff projected at the liberal audience is designed to excite powerful emotions, while at the same time deliberately (or apparently so) failing to inform us of the full facts of each issue. I don’t like being manipulated in this way. I especially don’t like being herded to and fro by my own team.

When the manipulation comes at me from the conservative side, I can see it and defend myself by fact-checking, but when it comes at me from the liberal side, not only am I less apt to fact-check, if I DO fact-check and then disagree, even slightly, the price of that disagreement can often be a fairly nasty attack or dismissal from my own people.

There’s an over-dramatic act of line-drawing that happens in the presence of the OMG Screamers, where if you disagree with them even slightly, you get shoved over into the Conservative category and accused of hating the downtrodden of whatever issue is under discussion. This is an exact mirror of the same situation on the conservative side of the line, where, for instance, if you disagree about people with known mental illness being allowed to open-carry assault weapons, you’re a commie-fag-hater-of-America and probably deserve to die. 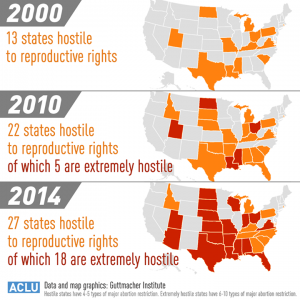 As a for-instance, this graphic detailing U.S. states that have enacted strong anti-abortion legislation over the past 14 years shows a clear loss of ground for “our” side. We’re winning on gay marriage and marijuana legislation, but losing dramatically on reproductive rights, which has the potential to cause vastly more actual misery for women — but also for men, children and families. Not to mention the real social and economic cost of an unavoidable rise in numbers of unplanned or unwanted births.

Comparing the progressive loss of reproductive rights to catcalling, another subject dear to feminist hearts, one of them strikes me as something that should energize the concern of every reasonable person, the other — which probably received a thousand times more attention through the recent catcalling video — seems a minor issue designed to spur directionless outrage.

I think we liberals have to do a better job of THINKING about our issues, not only picking our battles but considering each issue and event carefully to see if we actually support the apparent mainstream position. More than anything, we owe it to our individual selves to be informed — well-informed — on any issue that we choose to speak out on.

I would much rather see myself up there in the company of Reasoning Beings than down in the region of the OMG Screamers, however effortlessly teamlike that second choice might feel.