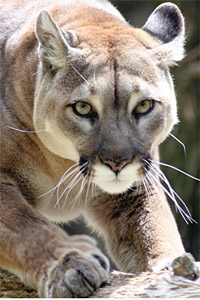 Comedy is where you find it.

Others that sound even funnier (but still probably aren’t):

Astrovirus infection sounds like it would lay Astroboy up for days with a high fever.

New York-1 virus infection is probably something only the governor of the state of New York can contract.

I hear American Express is suing to have a disease named after them. For everyone else, there’s VISA (Vancomycin Intermediate Staphylococcus aureus).

Kawasaki syndrome can only be caught by wussies. Real men get Harley Sickness, or they get nothing at all.

I had mumps as a kid, and I know it’s serious, but it still sounds like something only Eeyore would come down with. It’s even fun to say: Mumps. Mumps. Mumps.

Q fever is particularly virulent among Star Trek: The Next Generation fans.

And finally, a decidedly unfunny one: Anytime you read about it in the news, it’s usually prefaced with the phrase “antibiotic-resistant superbug” — MRSA (methicillin-resistant Staphylococcus aureus)  killed about 19,000 Americans in 2005, most of them in hospitals, according to a report published in October in the Journal of the American Medical Association. According to Wikipedia, that’s more people than AIDS. Each year. And you can catch it from touching people.

And we worry about mountain lions. 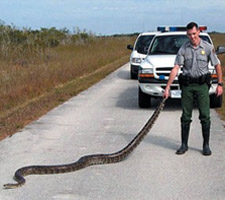 “As for other potential prey, human beings – like rodents, beavers and deer – are mammals, government scientists confirmed.”

… Of course, we’re all going to be eaten by giant snakes. But still.

New threat to our way of life: giant pythons 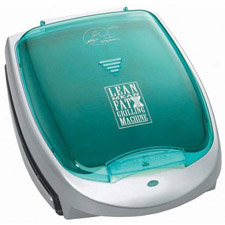 I subscribe to ZenHabits, a cool site on simplicity and productivity. I wrote a post this morning I thought might work there, but when I checked on the site, they don’t accept outside submissions. So. I’m gonna start doing it myself.

I’m calling this post, and others to follow, “Xen Living” because every form of the word “zen” appears to be taken. Zen Living, Zen Tiger, Zen Dog, Zen Pig … I finally gave up when I found myself about to Google “Flaming Zen Buttocks.”

Xen. Let’s say it’s pronounced the same as Zen, but have it mean something different. I picture Xen as something ballsier, more determined to make positive changes. The philosophy of Xen, as I define it, is “Don’t just complacently adapt to the life that’s presented to you. Make IT adapt to YOU.” (But don’t make a xenhole of yourself.)

I cooked a salmon roll for dinner on my George Foreman Grill. And then left the grill there on the counter overnight. END_OF_DOCUMENT_TOKEN_TO_BE_REPLACED

Pooh. I went to Washington, DC last week and left off working out and eating right for the duration of the trip. Still haven’t gotten back. I haven’t gained any weight, but I haven’t lost any either. And my other fitness gains have been on hold too.

One of the email lists I’m on, it might be Zen Habits, encouraged writing oneself a formal pledge related to goals — and set in a four week time frame — and signing it, so I did that. Here’s the part that relates to health:

I pledge that for the next four weeks, I will work out no less than four times per week at the gym.

I pledge that for the next four weeks, I will walk or run three miles per day, three days a week.

I pledge that for the next four weeks, I will eat no less than 5 servings per day of fruits and vegetables.

I pledge that for the next four weeks, I will consume no drink or food with added sugar in it.

Typically, I’m lousy at keeping promises to myself. But I seem to have been better recently, and I think I can accomplish these things for this short time.

Whoa. Found this at The Amboy Times.

Excerpts from “The List of Things that Offend Muslims.”

Sharia law demands submission not only from Muslims, but from non-Muslims as well. This makes respectful coexistence nearly impossible with Muslims in Infidel lands. The examples below serve as reminder that submitting to one complaint or another only emboldens Muslims to seek to further their ultimate goal of establishing sharia.

END_OF_DOCUMENT_TOKEN_TO_BE_REPLACED

Ten seconds in the door and I’m over by the Apollo 11 Command Module, lines of moisture running down my face. I stand there looking at it, touching the transparent case it rests in, for a good ten minutes.

I’m overcome by just how magnificent an accomplishment this thing represents. In an era when Washington seems a fount of lies and stupidity, this was something done by MY people, the people of learning and reason and courage. Men sat in this thing, and traveled to the Moon! And came back alive!

Maybe I can’t match the feat, but I can recognize the magnitude of it. In my atheist heart, I reserve reverence for true achievement.

This, the real thing, kindles bright sparks inside me, and sets off tears. 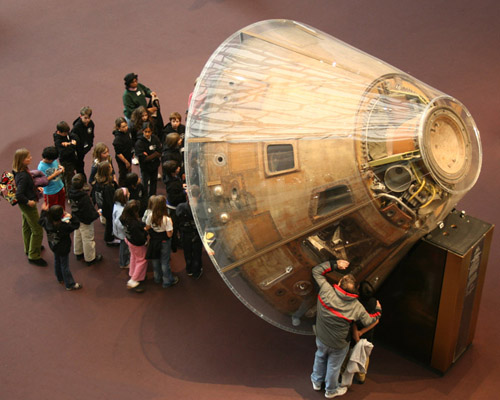 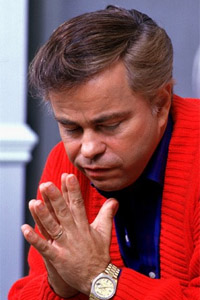 Jim Bakker is back.

Remember Jim? Jim of “Jim and Tammy Faye”? The Heritage USA televangelist who diverted millions in donations from hapless Christian faithful to his own wallet? For which he was convicted and spent five years in prison?

He’s risen again to swindle a whole new generation of victims with the same old god-game scam. And here’s the corker: His victims from before have returned, convinced that the whole thing was a mean-spirited plot against poor misguided Brother Jim.

Doesn’t stop him from scamming them for donations, though.

Jim Bakker waits 41 minutes into his one-hour show to make his plea.

He begins by noting they have been off the air for six weeks.

He is talking directly to the camera now. He says he has a music CD for “a love gift of $30” and a DVD about marriage for a $55 donation. He decides to offer a recording of his sermon about prison, just $20.

END_OF_DOCUMENT_TOKEN_TO_BE_REPLACED 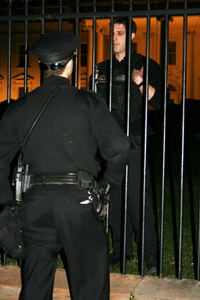 I just got back from a day trip to our nation’s capitol.

Whew. Impressive place. I got to see the Air & Space Museum, the Lincoln Memorial, the Washington Monument, the Natural History Museum, and the White House.

Standing in front of the White House, I talked to some of the young guards while I took pictures. Nice kids. I asked one of them “Is it okay for me to take your picture?” and he answered in good humor, “I can’t stop you, but I’m not going to pose for you.”

I was expecting squads of uniformed gunnies tooling around in armored Humvees, but I walked around all day and saw very few armed presences. There were a LOT of people with earphones on, though, and I wondered if some of them were plain-clothes cops only posing as iPod drones.

I walked around wearing my Harmless Idiot Field, and nobody so much as looked at me all day. Considering that I have a telephoto lens big enough to conceal a baby bazooka, that was unexpected.

Fitness pretty much went out the window during this trip. I did walk about 10 miles around the National Mall, but I also ate junk food the whole time I was there.

I know it’s bad of me, but as long as Dick Cheney sits in the White House, I will think of it as Castle Greyskull. 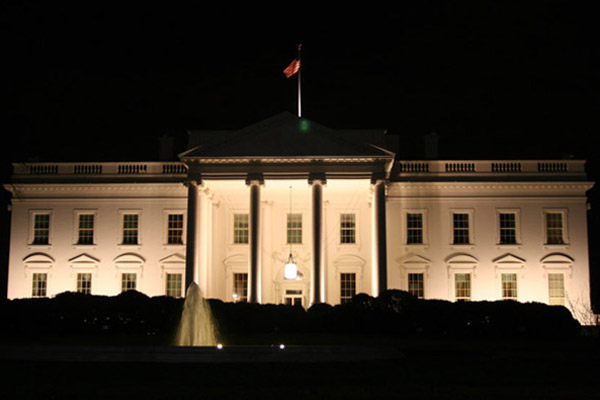 I’m comfortably below 180 now. I got out of the shower a few days ago and glanced down at my legs and was amazed at how GOOD they look, muscle-wise. And I can’t get over how when I touch my belly, there’s noticeably less of it.

Still, I’m coming up on a month at this. I kinda wish it was going faster.

One thing I do know, my on-scale weight is actually a poor indicator of the changes going on inside me. I almost wish I’d been able to do one of those underwater weighing things so I could know just how much fat I’m losing. Obviously, if my arms and legs are solider and more muscular, whatever that extra muscle weighs has replaced an equal weight of fat — beyond that shown on the scale.

And is muscle denser than fat? I think it must be. Which means the volume of the replaced fat is greater than that of the new muscle. Even though I’ve lost only 11 pounds or so on the scale, the fat overcoat I’ve been wearing over my whole body is significantly thinner. I feel like I’ve probably lost a good 15 to 18 in actual fat. 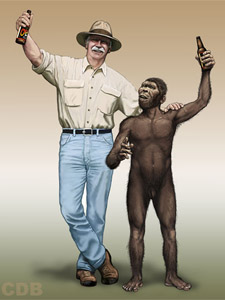 Darwin Day is an international celebration of science and humanity held on or around February 12, the day that Charles Darwin was born on in 1809. Specifically, it celebrates the discoveries and life of Charles Darwin — the man who first described biological evolution via natural selection with scientific rigor. More generally, Darwin Day expresses gratitude for the enormous benefits that scientific knowledge, acquired through human curiosity and ingenuity, has contributed to the advancement of humanity.

Ignorance more frequently begets confidence than does knowledge: it is those who know little, and not those who know much, who so positively assert that this or that problem will never be solved by science. —Charles Darwin

Thanks to the fantastic Carl Buell, paleontological and natural history illustrator, for the pic above — a self-portrait (of Carl) raising a bottle to Darwin with one of our ancestors. And then there’s this birthday card he did for Mr. Darwin a year or so back.

… And happy Lincoln’s birthday too!