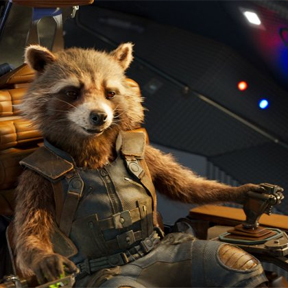 Guardians 2 was really, really good. It takes a while for the main conflict to show up, but the wait is worth it. This movie has a LOT of humor in it — I laughed a dozen times or more — and it’s perfectly placed within the story so that it draws nothing away from the seriousness of the main plot.

There’s some unexpectedly touching stuff involving Rocket Raccoon (and Yondu, among other characters), both midway through and at the end. Yeah, you’re gonna cry. The main theme of this movie is family, loved ones, and every character participates in developing that theme.

I could gush for a long, long time here, offering spoiler after spoiler, but … I’ll let you see the thing on your own. It’s good, believe me. 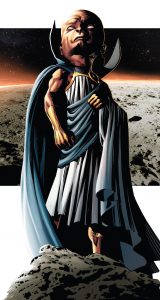 Stan Lee has TWO cameos, one an after-credits scene, and I laughed to recognize the people he was talking to — a trio of Watchers, those enigmatic high-collared baldies who exist to watch and record the events of the galaxy.

Oddly, there are a couple of Howard the Duck cameos. I can’t imagine Marvel plans to do anything more than shove him in as an occasional Easter Egg. Surely there’s not a Howard remake, right? I actually liked the silly original Howard the Duck movie, and was sorry it got such a bad rep. But it’s not worth another movie.

There are FIVE afterscenes, if I remember correctly, so you’ll want to stay through the credits.

One of the trailers before the movie is for Wonder Woman, and I’m really looking forward to that movie too.

I’ll be slightly surprised if any of my readers made the trip with me, and respond to this post. Obviously I haven’t been doing justice to the blog, and I wouldn’t blame anyone for tuning me out. Mainly, I’ve been working on that next book, BrainDrops. I’m doing a final proofing run now, but I plan to send review copies to a number of people, hoping for some good comments for the back cover or whatever. So don’t expect it before … oh, early June.

I tried something new in the atheist book genre; I hope it’s something readers will find both fun and thought-provoking.