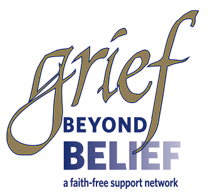 I’m an avid supporter of Grief Beyond Belief. Grappling with the death of a loved one — human or animal — is monstrously difficult, easily the most jarring event a person can ever undergo. Throwing religion into it, for someone who is NOT religious, only adds to the suffering.

Having a support network for grieving unbelievers is an absolute necessity, in my view. Anything less is, simply, cruel. But it’s a cruelty that’s gone unrecognized, unlamented by society at large. The goddy majority that can’t imagine a life without gods also can’t imagine reacting to life crises, or supporting those who are, without gods. They’ve either left us alone (rarely!), or intruded with fervent preaching — at the hospital, at the memorial service, in the days and weeks following — at a time when the last thing a grieving nonbeliever needs is More. Fucking. Preaching.

Intended or not, the message that blares out at us is “YOUR FEELINGS ARE NOTHING! STOP THIS WHINY GRIEVING AND BELIEVE IN JESUS AND GOD AND HEAVEN!”

Grief Beyond Belief is an alternative. A crucial NECESSARY place where unbelievers can express grief and share stories, where empathy and counseling can take place without the preaching. Where grieving unbelievers can feel visible rather than invisible.

I have a second, larger reason for supporting it, one that goes beyond my own experience of grief.

I strongly suspect even fellow atheists/agnostics/humanists have little idea. We make the atheist journey as individuals and then rest content, most of us, in our own private mental freedom.  When it comes to envisioning an entire society free of religion, we have difficulty even thinking about it. We can’t imagine how different life might be if we cast off the social structures and viewpoints grown out of, and fertilized by, thousands of years of religiosity.

And yet … you have to believe it would be better, possibly vastly better, in pretty much every way. The difference between a majority of us “believing” a seductive falsehood and that same majority knowing true things has to be huge. It would change not only the structure of society, but our individual selves, in health-giving, life-affirming ways.

But in the same way my own unbelief took a good 20 years to mature, even if we flipped to an atheist majority today, a lot of the really good results would take time to develop. Possibly hundreds of years.

I wish we were at the far end of that journey. Instead, we’re here at the beginning. We have no idea what sorts of things we’ll discover along the way. But one of the things I hope we’ll find is that death and grief is only one aspect of a much larger view of life, and that taking this more realistic view of death and dying will transform all the rest of life in fantastically positive ways.

Founded by school counselor Rebecca Hensler following the death of her son, Grief Beyond Belief has been operating on Facebook for three years, providing grieving atheists, Humanists and other Freethinkers with spaces in which to share compassion and advice without the uncomfortable intrusions of prayer and proselytizing.  From the page’s much-welcomed launch on Facebook in June 2011, to its surprising growth following glowing coverage in USA Today in Spring of 2012, to its expansion to a confidential Facebook support group the following fall, the community has continued to serve the growing secular population’s need for grief-support appropriate for those who do not believe in a higher power or an afterlife.

“When our Facebook Page reached ten thousand “likes” and our support group swelled to over a thousand members,” explains Hensler, “it became clear that it was time to expand to an independent website where we could provide additional resources for grieving nonbelievers.”

The website offers a number of features previously unavailable through Grief Beyond Belief’s Facebook-based presence, including:

The forum feature also allows subgroups within the network to delve deeper into shared experiences, such as grieving while leaving religion, or losses in common, such as miscarriage or bereavement by suicide.

The evolution of Grief Beyond Belief from a Facebook-based support community to an independent website marks an important step in the progress of the secular support movement, a step that is not going unnoticed by leaders and opinion-makers in the secular world.

“I’m so glad Grief Beyond Belief is expanding into a website,” says Greta Christina, author of the newly released Coming Out Atheist: How to Do It, How to Help Each Other,and Why. “The service they provide is so important, and now it’ll be much more accessible to a lot more people. The secular grief library and resource guide alone make the site invaluable. And with the website format, it’ll be much easier for grieving non-believers to talk with each other about specific issues they’re dealing with. It’s a big development.”

Sarah Morehead, the Executive Director of Recovering from Religion and American Atheists’ 2013 Atheist of the Year, agrees with Christina about the importance of Grief Beyond Belief’s mission.  “People experiencing the heartache and emotional trauma of loss need comfort, community, and acceptance…not conversion attempts.”

Morehead explains how Grief Beyond Belief fits into the larger movement to provide for the emotional needs of the secular community: “Recovering From Religion regularly refers people to Grief Beyond Belief and we see firsthand how much people appreciate a safe, secular, and caring place to deal with the challenging emotions related to the grieving process. Seeing the concept grow from a social media, grassroots effort to a cohesive resource center is truly fantastic, and we are tremendously proud to support and encourage them at every step.”

The website’s launch on June 19, 2014 has been over a year in the planning, as the project has depended on a small group of volunteers to design the site, collect and input links for the library, and gather contact information for the resource directory.  All the while, Hensler, her co-administrator, Nita Grigson, and a handful of moderators have continued to provide safe spaces for grieving nonbelievers on Faceboook and plan for the future of secular grief support.

“I know that the next step is to bring secular peer-to-peer grief support into the real world,” says Hensler.  “But for now, griefbeyondbelief.org is going to help a whole lot of people who are grieving without faith feel far less alone.” 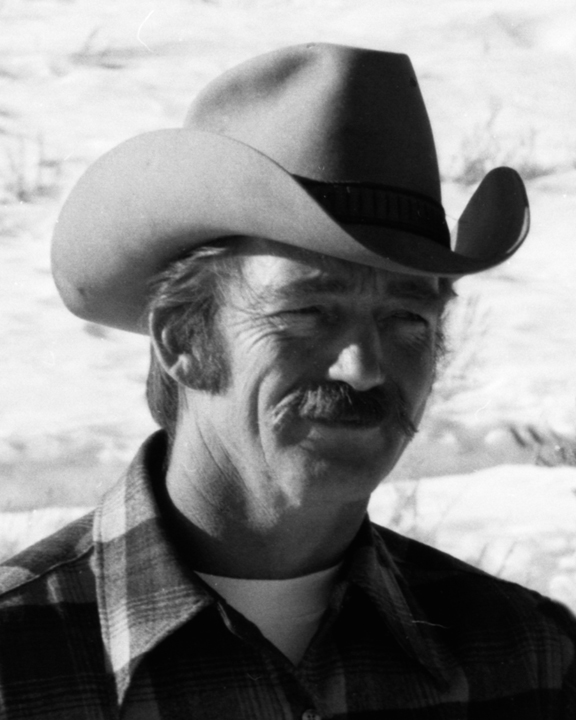 When I took my canine buddy Ranger the Valiant Warrior for that last trip to the vet, the doctor asked me to leave the room while he gave him the shot. I looked at him like he was crazy, told him flatly, “I’m not leaving.” I also asked him to give Ranger a shot of painkiller before the real killer. As Ranger died, I was there talking to him, stroking him, holding him, “You were the best, buddy! I’ll never forget you! I love you, handsome beast!”

When my Cowboy Dad was in the hospital dying, I was there holding his hand, applying a cool cloth to his forehead, talking to him, for four days. “I love you, Old Man. I always will. Thank you for all you did for me, all these years. You were the best thing that ever happened to me. The world is a better place for having you in it, and I’m a better man for having you as my mentor and role model.”

In each case, I was talking to someone who died immediately after.

A religious person might argue that this was a silly thing for an atheist to do, in that I believe the person “died dead” in the next few minutes. It would no longer matter what I said or didn’t say, would it?

But, first of all, if they only heard me for one minute, if they understood only some tiny fraction of what I was saying, it was still worth doing. Letting them know, in the final minutes of their lives, they were well and truly loved … I could never consider that wasted effort.

Second, it mattered to ME to make the attempt. This was the last moment I could say what I was feeling and have some hope of it being understood. It was the last moment, the last possibility of communication between the two of us. There being no sort of afterlife, this was even more important.

Third, the act is a reinforcement of a broader cultural practice, something I would like to see more of us doing. It’s a way of saying “This is the way we do it. This it the kind of people we are. We tell our loved ones we love them, in all the ways we can, and to their last moments of life, because we know there will be no other chance at it.”