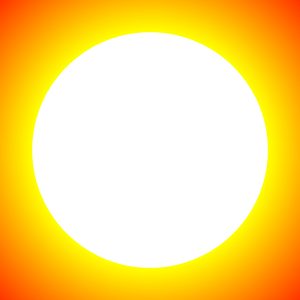 [ This is about somewhat the same subject as my recent “bracket” post – the ignoring of the full array of facts on a subject at hand by narrowly focusing one’s attention – but spotlighting a somewhat different aspect of it. ]

I saw some people taking a “group of happy friends” picture a week or two back at one of those highway rest stops. Watching them, I felt an urge to take the camera away from them and reshoot the picture, because I just knew what they were going to get – a silhouette with absolutely no facial details at all. Because though the group stared into the camera and smiled, the camera-wielder stared into the sun and clicked.

If you’re unfamiliar with photography, here’s what happens when you take a picture with the lens pointed toward the sun: The built-in light meter on your camera sees the sun and goes “Ooh, this is extremely bright. I’d better back off on the exposure so the final picture isn’t just a bright wash.” But when it backs the exposure down, EVERYTHING gets less bright – darker – in the final picture. The ultra-bright sun is tolerably exposed, but everything else is shifted into pitch-black shadow, with almost no detail. Your line of friends turns into a faceless silhouette with the bright sun behind it.

The proper way to do it is for the camera-holder to stand with the sun at his back, or at least the side. That way, the final picture appears properly exposed, with no detail-swallowing shadows.

It occurs to me that the situation serves as a useful metaphor for thinking about certain issues of social commentary. Because in quite a lot of current public debate, we see only the blinding wash of extremes. Moderates have become invisible.

Example: I’ve been frustrated over and over at the GMO debate, where pro-science people, people I know and ordinarily trust, come down in favor of GMOs in an argument-impervious way.

Most of us know the GMO field of argument contains a certain number of shrieking Crazies, the people who claim GMOs cause cancer, autism … hell, exploding eyeballs, shrinking weenies, who knows what else?

Against that blinding sun, GMO fans, who honestly believe the science should proceed unhindered by crazies and that the world needs a certain amount of efficiently-engineered foods to feed growing world population, can’t see anything but US vs. THEM. There’s the progress-minded US who favor science, and there’s the crazy THEM who want to destroy all things good. If there are any moderate positions, they are overshadowed in the brilliant glare of the crazies.

It’s a somewhat understandable reaction, of course. There are people out there who are not only bugfuck insane – OMG CHEMTRAILS!!! – but who are willing to lie about anything and everything to infect others with their same insanity.

But the thing is, there ARE some moderate arguments about hazardous aspects of GMOs. Hell, just the fact that nothing is entirely safe, that everything offers some sort of downside, is a legitimate argument. But get into any discussion with a GMO fan online, and you will instantly be branded a Tinfoil-Hat Crazy. Why do you hate the starving children? Why do you hate science? What’s wrong with YOU?

If GMOs were peanut butter, the wackadoodles would of course scream that it was deadly. In reaction, the pro-peanut-butter group would say they were crazy, that peanut butter is totally safe, and even necessary. But in the middle, you’d have to recognize that peanut butter is BOTH safe/nutritious and yet – to some people – deadlier than rattlesnake venom.

To the pro-GMO crowd, there is the glorious truth and necessity of GMOs, and there are the science-hating crazies, with no nuances, no colors or gradations in between. They can’t see moderate arguments in the blinding glare of the crazy ones. EVERY critical argument blends into that one black background.

As someone who thinks of himself as a middle-ranger, it’s frustrating enough that I’ve stopped even trying to talk to the GMO fans. In the time I’ve been interested in the subject, I’ve gotten exactly ONE person to actually listen to me, and to be open to the possibility that there may be some hazards in GMOs, and that those hazards should be considered in the development of public policy.

(I’d started a multi-part post some time back about GMOs, but pretty much abandoned it after early feedback. I might attempt a second approach to it at some point in the future.)

The sad thing is that GMO advocates have reacted to the crazies with their own apparent willingness to lie, to obfuscate and argumentatively tapdance — Why, people have been genetically modifying plants and animals for thousands of years! We can’t have labels because they would only misinform people! If you don’t like GMOs, you hate the starving children in Africa! — that is as offensive to me as anything the crazies are doing, and even less defensible because it’s coming from the supposed NOT-crazies.

‘Staring Into the Sun of Craziness’ applies to more than GMOs.

In the political sphere, for instance, moderate Republicans have vanished in the blinding sun of teabaggers. The teabagger-driven GOP itself can no longer acknowledge moderates.

GOP moderates exist. They even speak up occasionally. But they don’t make the news in the way the pro-Christian, pro-corporate, anti-abortion, rabidly anti-Obama and anti-government crazies do. And they appear to have almost zero power to steer GOP policy away from extremes.

There are anti-vaxxers out there, and they are, in my opinion, the enemies of public health. I know it’s good for all of us that kids get vaccinated against measles, whooping cough, etc.

But at the same time, I don’t kid myself that every individual child is going to sail through vaccination without reaction. I don’t know what negative reactions there have been, but I have to doubt there have been NONE. Heck, EVERY medicine has side effects, and legally-mandated warnings associated with it. Just poking a needle through a child’s skin carries potentially-deadly risks.

Awful as it sounds, I’m willing to accept that there will be risks to a small number of individual children, but that those risks must be borne in the face of the fact that greatly MORE children will be saved by being immunized against these killer diseases.

But if I said “Yes, I have some concerns about the safety of vaccines” – if I acknowledge the real possibility of risk there, I know some people will hear only “He hates vaccines! OMG, he must be an anti-vaxxer!”

Yet in admitting that vaccines can have side effects, I can favor vaccination AS WELL AS an ongoing push to make vaccines ever safer and less hazardous. If vaccines save the lives of 5 million kids at the same time they kill 30, I can both live with that AND want vaccine makers to do everything possible to cut that 30 to some smaller number. Anti-vaxxer arguments are irrelevant to this goal.

The pure pro-vax view, though, reacting to the blinding sun of anti-vaxxers, would probably never say anything like that out loud where anti-vaxxers could hear it. Admit that vaccines can be dangerous and have the crazies latch onto that and use it in their next anti-vax broadside? Oh, no! Vaccines are safe! Totally!

Feminism. What if I told you gender equality should take into account the sociocultural advantages and disadvantages of both women AND men? If you stood in the glare of rape jokes and death threats from the misogynist crazies, you’d have a damned hard time even recognizing that this was a legitimate point. Women are 100 percent the disadvantaged ones, and the only men who don’t agree are the evil ones who want to rape and kill us all. You can’t even hear “not all men want that,” because that statement means they’re  not listening.

But then again, from the men’s side, modern feminists themselves give off a glare of crazy. In addition to men themselves, there are uncounted large numbers of thoughtful, caring, pro-male women who want equality and safety and voice for everybody, but who vanish in the hot sun of feminist crazies.

(I once had an otherwise-sane feminist blogger – a guy – all but accuse me of legitimizing child pornography, because I said the viewing of a starlet’s naked pictures posted online was NOT sexual assault. How the hell can you sexually assault someone you never came within a thousand miles of? It might be crass as hell to view the pictures – which I didn’t – but it’s not in the same class as rape. It’s also – in my mind, at least – in an entirely different category than child pornography.)

There are quite a lot of Christians out there who believe in evolution and who are generous about the rights of gays and women and even atheists, but who get lost in the glare of the Conservative Christian crazies.

As an atheist, my opposition to religion is to its innate effects. Even the moderate Christians are wrong, in my view, and their beliefs carry far-reaching negative side effects on both larger society and individuals. Even so, I already know I can live with them. What I can’t live with are the crazies, who MUST be opposed.

In all of these cases, if you say anything from that position of the Invisible Moderate, either side looking at you will only see you as being part of the other side’s blinding sun of Crazy. They can’t make out that a moderate position might exist, that someone might both disagree with them and NOT be a crazy. That they themselves might be a little bit wrong.

But also in all of these cases, that middle ground – outside the umbra of loud, excitable adamant people – is the place where reasonable people are actually thinking about stuff, coming to their own quiet, solid conclusions.

When you think about it, that middle ground is really the only place where reasonable stuff ever happens. It’s only when you acknowledge that you can be wrong, that you might not be seeing the whole picture, the bigger picture, and THEN look into the dark places for missing facts and nuances, undertaking the further research and thought required to complete the picture, that you begin to be a reasoning being.

In the same way I’m greatly in favor of vaccination, you can still hold and voice strong opinions on any subject at hand. The advantage is that you’re better informed toward the position you finally take, and less influenced by the extremes.

It’s not your fault that, taking a moderate position, certain people will see you as one with the crazies.

But if you’re one of those people who sees only bright sun and darkness, perfect reason and absolute craziness in some important issue before you, before all of us, that IS your fault.