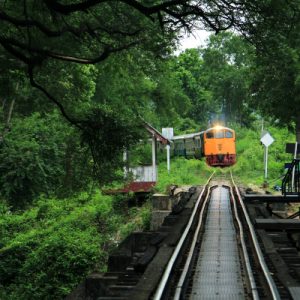 When a train hits a car, it’s pretty much never the train’s fault. If you just arrived on this planet, here are some tips on How to Avoid Being Killed By A Train:

1) Look for the big silvery steel rails, spaced about four feet apart. They will run for miles in each direction to your left and right. The rails themselves are a huge warning sign, and if all else fails, they will be there. However …

2) Where the big silvery rails cross the road, there will be a signal, likely a pole with red lights on it, and the red lights will flash when a train approaches. A loud bell will ring at the same time – Ding-Ding-Ding-Ding!!

3) Attached to the pole with the lights are these long metal barricades that will come down and block the intersection. The metal barricades are marked with bright colors, reflective tape and, often, flashing lights. Don’t drive around the barricades.

7) Trains are so massive they can’t just stop when the engineer sees you. Compared to automobile brakes, which actually halt the vehicle in some reasonable distance, train brakes are a sort of suggestion to the train, something like “Okay, let’s start slowing down now, and maybe in a mile or two we’ll think about stopping.” If the engineer of the train comes around a curve and sees you on the tracks, he goes “Oh, look, there’s another dopey bastard about to be killed by a train. Huh.” And then he applies the brakes.

8) Trains are fast because people who ride trains, or ship freight by trains, want them to be fast. If you stop your car on the tracks, and a train comes, it’s going to hit the car. And you. And everybody else in the car. You will all die, and you will have closed-casket funerals because it will be ugly.

9) If you stop on the tracks and you see a train coming, encourage your passengers to leap out and run away to the side, but whatever else you do, you as the driver should stay in the car. Because you deserve what’s about to happen, you brainless sonofabitch.

10) Just hope you don’t get a bunch of other people killed while you’re about it.