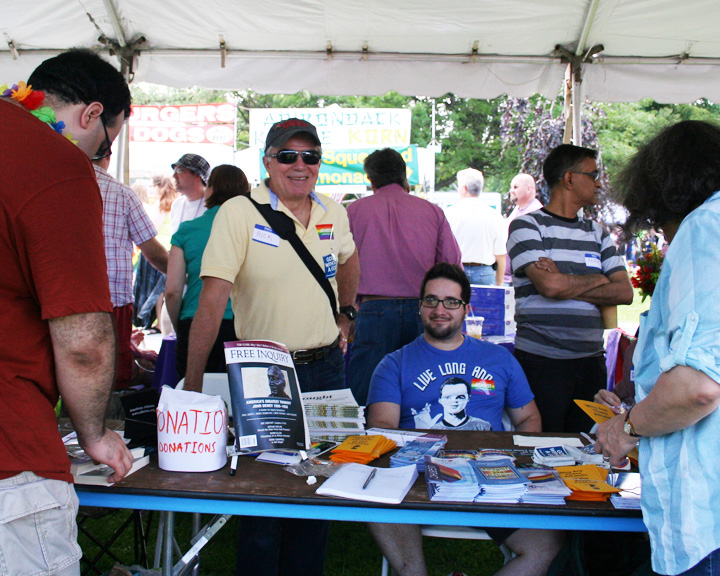 Whew! Fantastic event! My own personal thank-you to all who organized the thing, and all who attended, and especially to the members of CRAA who made it all happen. (I’m hoping some of them will chime in here and tell me who sent all the great atheist/agnostic/humanist stuff that covered the table and caught so many eyes.)

Photos follow. In order to see these large, you have to click on a photo, then click again after it opens in its own page. (I’m sure there’s some easier/better way to do this, but I haven’t figured it out yet.)

There was an eye-catching banner donated by one of the founding members, Rick Martin, “Why Are There Atheists at Gay Pride Day?” fliers written by Mike McElroy and designed by me, and just a whole mess of people who showed up to man the booth and offer moral support. Rick, Mike, Nick, Rich, Rajesh and Dan were some of the core booth-minders and crowd-schmoozers.

I’m ashamed to say that I had a “Proud to be an Atheist” button that I didn’t put on until I got into the city park where the event was held. Old habits, I guess, grown out of the goddy Deep South swamp I grew up in. But I’m proud to say that I did wear it all the way home.

There were plenty of people who came to the booth and asked questions or voiced support. There were also a certain number who came by and looked but walked away without speaking, some with doubtful expressions. But at least while I was there, there were no strongly negative reviews.

One thing really caught my eye — the number of churches and goddy organizations in the parade, all with messages of inclusion. I noticed it for two reasons — one a criticism, one a speculation.

The criticism is that churches were definitely part of the historical problem with acceptance of gay rights, and it’s interesting and wonderful, but also sort of annoying that some of them are now so big-tent buddy-buddy. That this group once cast out of churchy society is now welcomed in makes me feel less that there’s some inclusionary goodness happening, and more that a predator running short of its natural prey has decided to accept new kinds of meat.

The speculation is in regards to that very inclusionary phenomenon: If churches can evolve to accept and welcome the LGBT community, they can evolve to accept others. Except that’s not ever going to happen with atheists, is it? Because by our very nature, we’re not a group subject to that sort of inclusion— not by a church, anyway.

Which means, again, that we have to build our own culture, our own venue of social inclusion.

Side note to all the dog owners and dog lovers there today: MOST of the dogs I saw there weren’t having a very good time. It was a bit too hot for dog comfort (I hope you were all giving them nice cold water when I wasn’t there to see), but the music was also screamingly loud. Hey, it hurt my ears sometimes, and I have some hearing loss; can’t imagine what it must have been like for sensitive doggie ears.

I saw some dogs dragging on leashes looking like they wanted to be somewhere else fast.  I guarantee you, your dog would much rather be hiking in the woods with you, somewhere near a nice cool creek, than in a crowded city park on a hot, humid day.

I had my big mongo camera with me at Eschaton 2012, but I kept reminding myself I was there to learn, to speak, to mingle and meet. Which means there were plenty of people I didn’t get pictures of.

To my immense embarrassment, that means I have pics of almost none of the volunteers. Such as Seanna and Evan, who were the public face of the event for me. Seanna extended the invitation, Evan did the travel arrangements. Throughout the event, every time Seanna mentioned Evan and Far Horizons Travel, she repeatedly, comically, reminded us it was “the only atheist-run travel agency in Ottawa.”

But here are a FEW of the speakers and attendees: END_OF_DOCUMENT_TOKEN_TO_BE_REPLACED

I just started a new class today, and I was studying hard for almost half of it. I know you’ll understand the sometimes exhausting demands of higher education.

Official school picture below the fold (click to embiggen): END_OF_DOCUMENT_TOKEN_TO_BE_REPLACED

In fond memory of cooler days, here’s a pic from back when I drove sleighs and haywagons for a living.

That’s me on the driver’s seat. Up front are my coal black Percheron draft horses, Esther and Jim, both close to a ton in weight. Running alongside is my German shepherd best friend, Ranger the Valiant Warrior.

This was the early 1990s, and I was already happily godless.

You Europeans will be tolerantly amused by this, but …

I live in an apartment in Schenectady, New York. (It’s kinda near the center of the state, if you’re not familiar with newyorkography.) It’s an older building. In fact, the area I live in is the oldest part of the town — there’s a building a few blocks away that dates from the late 1600s.

My building dates from the 1800s. It’s a creaky old thing, but comfortable. I’d like to show you a series of pictures from when I went down to the basement today to do laundry.

This has probably been out there for a while, but I’m pretty sure it’s the first time *I* have seen it.

The Vatican has a virtual tour of the Sistine Chapel.

You can mouse around it. The navigation is weird, but if you work at it, you can see all of it. You can also zoom in and out with your mouse’s scroll wheel or the Shift and Ctrl keys.

A couple of thoughts: END_OF_DOCUMENT_TOKEN_TO_BE_REPLACED

I take pictures, did you know? Sometimes it’s just scenery, sometimes events with people in them.

But sometimes it’s scary things. It’s fairly woodsy here in upstate New York, and though I know most people from outside the state picture wall-to-wall cities, parts of it are actually pretty wild. I know you’ll find this hard to believe, but the state has some pretty big predators.

Living as I do on the edge of the wilds, I get to see them sometimes. Usually they’re safely distant, but just a few evenings ago, one of them came up INTO MY YARD. Right outside my window, in fact, in broad daylight!

I was lucky to have my camera. Picture after the fold.

[ Note: I just want to make sure newcomers are familiar with the way to get to the rest of these “folded” posts, here and elsewhere on the FreeThought Blogs site. Click on the “Read More” link on the lower right, just below this sentence. ]