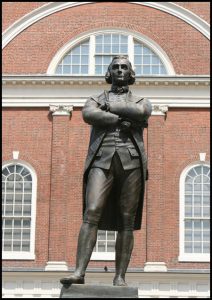 I’m not very big on saluting the flag, or flying one at my house. To a lot of people, that would probably spell a serious lack of patriotism.

But my view of America is probably different from yours. To me, America isn’t about a flag, or soldiers marching in parades, or posts on Facebook about “Support the Troops.” It isn’t even a country. It’s this whole other thing, something you can’t see or point to or wave overhead.

America is a body of ideas. As such, it can be anywhere. It’s the idea of freedom of speech. The idea of a free press. The guarantee against unreasonable searches and seizures, and the right to a speedy, public trial. It’s about freedom from slavery, and the right of women to take full, fair part in all aspects of public life. It’s about the right to bear arms. And yes, it’s about freedom of religion, but it’s also about this much greater religious right, the hidden one, the right we have yet to really understand or embrace, freedom FROM religion.

It’s this one more idea, to me — something you won’t find in the Constitution or the Bill of Rights.

It’s The Idea of Something Better. A better life. A better chance. A better range of possibilities for yourself and your kids. THAT is what drew — and draws — immigrants from all over the world.

And the thing is, once you adopt that idea, in that moment you become an American. You might be a homeless El Salvadorean, an uneducated African, or a Syrian refugee with literally nothing more than the clothes on your back, but the minute you set foot on the road toward the U.S., the road to Something Better, you’re an American IN THAT MINUTE.

I do expect the people who come here to aim for something more than their home country and home culture provided. Frankly, I expect them to learn English — not because I hate the poor immigrants, but because I know their BEST chance of succeeding here is to speak the language, and speak it well. I don’t begrudge them the right to honor their home culture, if they choose, but I also darned sure expect them to learn all these OTHER values and ideas that make up America.

But frankly, I’m not too worried about immigrants. And though I don’t like or respect Islam, I’m also not all that afraid of it. Hey, if you have to threaten your own people with death in order to keep them, what does that say about you? It’s a crappy second-rater on the world stage, and all the second- and third-generation Muslims in the U.S., whatever their parents were, are probably going to be ordinary American kids.

The heart of America, to me, isn’t soldiers and guns. It’s ideas. As such, my heroes — the REAL heroes of America — are librarians and teachers. My heroes are scientists and thinkers, writers and reporters and yes, even protesters and whistle-blowers — the warriors of conscience who fight in their own ways for The Idea of Something Better.

So don’t expect me to salute when you drive by with a flag on your truck. I’m less impressed with the mere symbols of America, when I can see, and partake in, the real SUBSTANCE of America all around me.

I wish you a happy Fourth of July.