I have some fairly conservative friends out west. And when I say “friends,” I’m not kidding, or speaking in the Facebook sense. I mean people I love, good people, people I want to have in my life forever.

But THEY have friends, and those friends have friends, on and on outward on Facebook Planet, and I occasionally see posts my own friends liked or commented on, that are — let’s say — non-contiguous to me on the Venn Diagram of socio-political views.

So here’s this shooting in Dallas — Five cops dead, others wounded, Black Lives Matter in the mix, all manner of anger and righteousness and conservative vs. liberals swirling around.

And I see this: 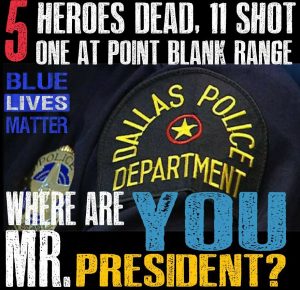 Not even gonna comment on it, but the reactions to it were … interesting. These are all verbatim, typos and all:

Jesse Ross: hmmmm , just in time to take the heat off of Hillary .Be very skeptical of what the media is putting out right now , just like the last shooting at the gay night club , it was busted as a false flag , it was part of the summer chaos crisis acting to push the Gun control issue , and the actors were found out , that is why you no longer hear it in the news. they are running out of time to get their agenda in place..if it is true , I feel bad , but I no longer trust the things we are being told by the media.

Jesse Ross: and while this kept everyone watching the right hand , the left hand signs EXECUTIVE ORDER To Take Over America yesterday…don’t believe me ..google it.

Marta Verissimo: Where is he? Busy preparing a speech that will further inflame and divide America. What does he think he’s going to accomplish by calling America racist every time he gets a chance? Violence that’s what. And no he will not blame guns. He will now blame us Americans for being racist. Again serving his political agenda. Wake the hell up people!

Mary Lessigne: All those strategy sessions with Obama & BLM leaders at the White House finally paid off for him

James Randolph: Obama has destroyed this country. Racism was never as bad as it is know. And all you will get out of Obama and his administration and the Democrats is more gun control. Worst President ever.

Ricardo Brown: All presidents since Kennedy have been puppets of zionism. Obama is no better or worse. He’s just folliwing orders.

Janice Wagoner: Our race bating president is glad this happened, it got the news media talking about something other than the turncoat FBI director who gave a total pardon to Obama’s hopeful replacement, Hillary.

Lee Veatch: Our p.o.s. president doesn’t give a damn about cops dying. That’s just 5 less enemy soldiers his army has to fight when his war starts.

Alan Kinsman: All part of Obama’s agenda. There is much more to this story than we will ever know.

Ricardo Brown: It’s not obama’s agenda, he’s just following orders. All presidents since Kennedy have been Zionist puppets. Kennedy’s assassination was a warning to future presidents.

Paula Griffin: Our president is a Muslim and a black terrorist that’s why he supports all this violence

Sandy Otto: What, no comment yet, what a surprise. Where is he and the family on vacation now?

Bill Sitter: Out of the country like he always is when this stuff happens.!!!!!!

Susan Day-Schisler: In Polland, is it strange to anyone else that he’s almost always out of country when disasters hit OUR COUNTRY?

Matt Duc: Bull shit post last night was flase flage u cant buy that caliber sniper rilfe legally if they pull anoth gun control law shit ima laugh cause the only way to buy guns like that are black market or deepweb for alot of bitcoins and yes this shit is real problem these people are not using the guns we as citizens use to protect our selfs these weapons that these criminals get are alot more powerful on par with guns our own amry has i used to no people that had fully atomic rilfes and im not talking ar 15 im talking shit like ak 74s and up shit thats banned and these people have no trouble geting more either i think our country would suffer more if we outlawed guns for citizens to protect them selves with

Dianne Johnson: That bastard is sitting in the White House laughing!!!!!

Emanuel Oshana: Scumbag is too busy dividing this country . He’s got plans for all of us come this election, does anyone else hear Martial law coming ?? We need to clear this trash out of the White house and take our country back . All these shootings one after another are all red flags

David Cobb: He is talking the same BS about Gun Control, when are these Idiots realize thugs and criminals don’t care about Gun Control other than taking guns away from law abiding citizens. They, these thugs and criminals will get guns no matter what, the Obama Administration has provided guns to drug Cartels and Terrorist, but they want to disarm Americans who obey the law. Liberals are idiots.

Vickie Hibbard: He staged it so he can take our guns

John Mccann: He is one of the black lives that doesn’t matter

David G. Patterson: LISTEN Folks!!!! Too much talk and not enough decisive action. Just like obama being president for two terms…….it was becouase the powers to be wanted it to be. It had nothing to do with your vote, black vote or electoral vote. It is all due the the corrupt, greedy, selfish, none patriotic assholes that just continue to get richer at our expense and do nothing for our Nation. It’s all about them and to hell with us and our Constitution and Bill of Rights. Now………….LISTEN……we can talk, bitch, complain, post etc all we want. Someone has to get to the actual ROOT OF THE PROBLEM or we are in laymen terms “FUCKED”!!!!!

Don Hanson: HE IS BUSY PRAYING FOR MORE DEAD AS LONG AS THEY ARE NOT MUZZIES BUT IF THEY ARE THEN HEW WILL DENY THEY ARE ISIS OR RADICALS.

But really, those Jews who Rule The World, they’re to blame. 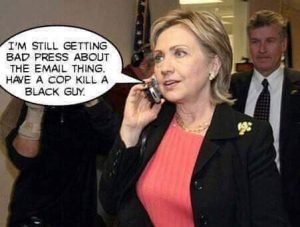