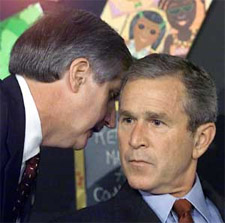 This is from an email I sent out this morning, the anniversary of the attacks of Sept. 11, 2001.

The main part is the “Questions on the Anniversary” at the bottom. The “special note to friends” at the beginning was intended to be a tiny little side note, but grew into the not-so-tiny thing it is. Email begins:

I couldn’t resist sending this around, mostly because when I woke up this morning, the first thing I thought of was how much mileage Republicans and conservatives have gotten out of the Sept. 11 tragedy.

A special note to my friends who are conservatives and Republicans: Yes, some of you have asked me not to ever again send you anything critical of President Bush. The problem is, he’s not just YOUR president. He’s mine, too. At some point, we’re all going to have to face who the man is and what he’s done. To me, it really looks like he’s been a disaster for the America we both live in and love.

Not long back, I got into an in-person argument with a Bush backer. The guy was literally shouting at me. I finally shouted back “Can you tell me any ONE thing Bush has done wrong? In your opinion, has he EVER made a mistake, or told a lie? Just one? Anything?” The guy had the most shocked expression on his face. I could tell he’d never even thought about it. And he didn’t have an answer.

Not everybody who questions Bush — or the people with whom he surrounds himself, or the people campaigning to take up his mantle and continue it for another four or eight years — is evil and hates America.

Speaking as an American, and a liberal, and an environmentalist, and a secularist, and even just as a thoughtful person, I’m tired of being hated by some of my fellow Americans. Some of YOU.

I’m tired of Rush Limbaugh, and Bill O’Reilly, and Ann Coulter, and Michelle Malkin, and all the other relentless voices of the Right. I’m tired of the people ready to brand me a traitor because I don’t wave a flag at every opportunity, or walk around proclaiming my faith in Jesus all day long, or cheer every word that falls out of Bush’s mouth, or believe that every person who ever wore a uniform is some kind of hero who can do no wrong.

I’m ready to be done with it, and enter into a new chapter in American history. I’m ready to believe that we’re ALL Americans, and not just some of us. I’m ready to live again in a time when you could have different opinions, strongly different ones, and still be counted as part of the vital heart of our country.

Too bad I can’t do that by myself, huh?

Questions on the Anniversary of 9/11

(Borrowed from “Bill in Portland, Maine”)

When he was warned in the August 6, 2001 PDB, “Bin Laden Determined to Strike In US”, why did the president do nothing except tell the guy who delivered it to him, “All right, you’ve covered your ass, now”?

Why did Rudy Giuliani put the anti-terrorism command center in the World Trade Center against the advice of experts who knew better?

Why did the president sit in that Florida classroom for several minutes after being told “America is under attack”?

Why were members of the bin Laden family allowed to fly out of the country when all planes were grounded?

Could there be any greater examples of heroism than the passengers who fought back on Flight 93, the rescue teams at the Pentagon, or the NYPD and NYFD responders who ran into the towers without hesitation?

Why did firefighters have faulty radios instead of dependable ones, Mr. Giuliani?

Was it really necessary for the president to tell us to go shopping?

Why were rescue workers at Ground Zero told by the EPA director that the air was safe to breathe when it wasn’t?

When rescue workers got horribly sick from breathing contaminated air, why were so many given perfunctory treatment and then left to fend for themselves?

Why did Rudy Giuliani say he “was at the site as often, if not more, than most of the workers,” when he only visited the site for 29 hours over a span of 41 visits?

When Glenn Beck — one of the most respected figures in the Republican party — said, “When I see a 9/11 victim family on television, or whatever, I’m just like, ‘Oh shut up!’ I’m so sick of them because they’re always complaining,” why wasn’t he banished into obscurity?

When the president stressed the importance of safeguarding our ports and vital infrastructure, why did he take so long actually safeguarding them? Are they much safer today?

When the president called for greater security at airports, why was there such a lopsided focus on passengers and very little on cargo until recently?

When we found out that most of the hijackers were from Saudi Arabia, why did the president continue holding hands with their leaders?

Why were habeas corpus rights suspended years after the attacks of 9/11, when the country wasn’t in a state of rebellion or invasion?

When Congress found out the president had broken the law before 9/11 by snooping on American citizens without warrants, why did they patch up the law to make his — and the phone companies’ — illegal activities retroactively legal?

The president nominated Bernard Kerik to be the head of Homeland Security … and he wasn’t joking??

When Ann Coulter — one of the most respected figures in the Republican party — said, “These broads are millionaires, lionized on TV and in articles about them, reveling in their status as celebrities and stalked by grief-arazzis. I’ve never seen people enjoying their husbands’ deaths so much,” why wasn’t she banished into obscurity?

When Bush had bin Laden in his sights at Tora Bora, why didn’t he take the shot?

Why were we told repeatedly that Saddam Hussein was partly responsible for the attacks when he had nothing to do with them?

When we needed more troops to vanquish the Taliban in Afghanistan, why did we invade Iraq?

If we’re winning the “War on terror,” why hasn’t the color-coded terror alert level changed from Yellow to Green or Blue in 2,382 days?

How unspeakably crude was it for the Republican party to exploit the 9/11 attacks in a promotional video during their convention in St. Paul?

When Jerry Falwell — one of the most respected figures in the Republican party — got on TV and said, “I really believe that the pagans, and the abortionists, and the feminists, and the gays and the lesbians who are actively trying to make that an alternative lifestyle, the ACLU, People For the American Way, all of them who have tried to secularize America. I point the finger in their face and say ‘you helped this happen’,” why wasn’t he defrocked and sent to work in soup kitchens for the rest of his life?

Why is there still a giant hole in the ground in Lower Manhattan?