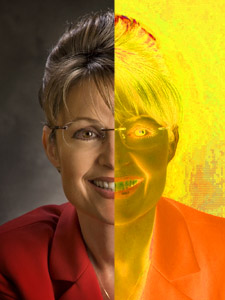 Good things are happening right now: The news media has finally, finally, FINALLY grown a set, and is asking the McCain and Palin camp some hard questions, and demanding answers.

For Palin, the shit just keeps flowin’ on down. I can’t believe the kind of stuff I’m reading about her, on a daily basis.

McCain and his “soul mate” are goin’ down hard.

And oh, yeah, Palin’s post-election political career in Alaska? Toast. Even a conservative speaking career may be out. Conservatives will wake up on Nov. 12 and find themselves in bed with the ultimate Coyote Date, and will chew their own arms off to get away from her.

Two years from now, I imagine Sarah Palin on the Jerry Springer show, accusing a surprised milkman of being the father of her baby.

Five years from now, I see her on the Surreal Life with Carrot Top and The Naked Cowboy, getting two of her teeth knocked out by Tonya Harding.

Twenty years from now, “Palin” will be the punchline of a joke only historians tell … to other historians.

I’m watching the Palin story and thinking she’s the ultimate product of the GOP’s reverse-evolution of America, the pinnacle of triumphal brainlessness. Reagan begat Bush begat Palin, who’s so morally and intellectually devolved she practically has scales.

On a video I saw today, Chris Matthews quoted someone “If the GOP was dog food, they’d take it off the shelf!”

I think it’s more like “If the GOP was a nuclear reactor, we’d be witnessing a full-blown meltdown.” Or, worse, this election is the asteroid that will slam into Planet GOP and leave nothing but a thin layer of iridium covering deposits of extinct conservative talking points.

The coolest thing about all of this is watching conservative voters swallow and swallow and swallow while the Republicans just keep on pumping it to them. Apparently your average conservative voter literally has no standards, literally is unable to objectively evaluate anything thrown at him, and has no choice but to simply accept whatever he’s told.

Pregnant unwed teenaged daughters? Scandalous and disgusting only a year ago (if it had happened to Chelsea Clinton, she’d be the star of sex-ed films they’d show in Southern Baptist churches for the next 50 years), suddenly it’s a sign of MATURE, RESPONSIBLE MOTHERHOOD.

Losing your job and house? It’s the sign of a FUNDAMENTALLY STRONG ECONOMY!

Conservatives are like meat robots just waiting for programming by Bush, Rove, McCain, O’Reilly & Co. Punch in the passwords – Liberals! Terrorists! Democrats! Prisoner of War! – and then upload whatever you want.

Compassion suggests I should feel bad for them, but considering what they’ve done to the rest of us, in a way it’s a delightful bit of justice.