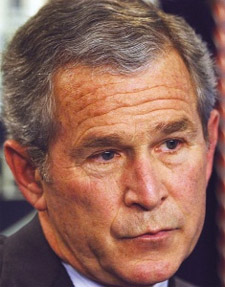 “On Monday, the Dow Jones industrial average dropped 504 points, its worst drop since the attacks of Sept. 11, 2001. But Bush did not address the nation that night.

“Instead, he held a state dinner for the president of Ghana. Gratin of Maine lobster, late-summer corn pudding, ginger-scented farm lamb and graham cracker crumble with cocoa pod shell was served. Eleven members of the cast of ‘The Lion King’ came down from Broadway and performed. It was quite a bash. The Washington Post described President Bush and Ghanaian President John Kufuor as ‘ebullient.’ ”

Probably tired from all the ebullience, Bush then vanished from the public eye for the next two days.

On Thursday, three days after Monday’s crash, Bush finally managed to drag himself away from the important business of relaxing and enjoying life in private, and addressed the nation from the Rose Garden. In a speech 263 words and two minutes long — 120 words and probably a couple of hours less than he devoted to his Marie Antoinette-style royal bash — Bush assured us “I will continue to closely monitor the situation in our financial markets and consult with my economic advisers.”

For all of us still defending and believing in Bush, still thinking the man has any brains, any heart, any courage, surely there must come a point when we realize we’ve been living in the Land of Oz. Where we wake up and say “I was wrong.”

He’s a little man, an ordinary man, and maybe that’s great for a next door neighbor or the guy who runs the local tire store, but he was a desperately wrong choice for president, a disaster for America at a time when we needed someone big enough and smart enough and courageous enough to deal with serious business.

Patriotism has its place. But we’re now at the point where we have to admit, if only to ourselves, that we’ve placed trust in an incompetent, a man who has been a disaster for the nation almost from the first day he took office.