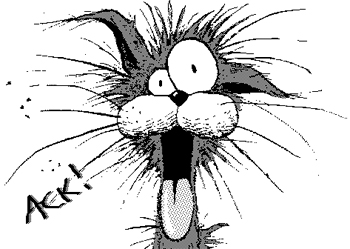 Before I started A Citizen of Earth, I blogged as The Blue Collar Atheist.

The name was mostly intended to underline my lack of a college degree, or any great amount of advanced education, to make the point that giving up religion, become an agnostic or atheist, is not something you need a Ph.D. to do. You can be a complete doofus and still reason yourself free of it.

Speaking of which, even *I* can see the gaping holes in some of the stuff from this site (hat tip to commenter Chris for the link): Creation Science 4 Kids.

Clicking through it, I come across bits like this:

Dinosaurs fit into the Creationist worldview far better than they do into the Evolutionary storyline.  These Creatures size, power and careful design don’t show the slow and steady increase in complexity that is the bedrock of Evolutionary thought.  They do make a lot of sense in our view, especially since the Bible mentions them in a number of places!

We actually have lots of evidence that people were quite familiar with dinosaurs.  We just never called them that until the mid-1800s.  We called them dragons.

Apparently artistic representations of dragons from various cultures are the proof. I mean, you couldn’t have ALL those different cultures painting these things, not unless they existed! Because obviously none of those people EVER talked to each other, or told their best scary stories around shared campfires.

One of the pages is Kids Resources. A sampling of “Family Creation Camps”:

The page also lists Online Activities, Bible Stories and Videos. And damn, there is some scary shit there, and big heaping truckloads of it. Scary not because it’s sheer flat-out lies, but because the lies are mixed with true stuff, descriptions of real places, real animals, real science. If you have even less education than I have, or read less widely than most of US do — especially if you have a religiously-cultivated mistrust of “experts” and educated people —  it all starts to sound plausible. Plausible enough to inspire further doubt of them SIGN-tists and all the unbelievable stuff they say.

Here’s what passes for erudition on the site, which is, remember, aimed at and for kids. Excerpt from a book review:

The first thing I noticed about Evolution Impossible is all the footnotes. I checked the whole thing and only found 11 pages out of 179 which didn’t have references. Most of those 11 pages were the half pages at the beginning or end of a chapter! Dr. Ashton expects you to search out the truth for yourself.

Then there’s the amount of math involved.

Yeah, the number of footnotes always impresses me too. Most of the books I recommend to people, I make a point of mentioning how many footnotes there are. And the math, I always talk about the math. Because it’s, you know, MATH, right?

Take a look at The Akron Fossils and Science Center. It’s like Science! Science! Science! … until you get to the creationism and climate change denialism. But no matter, it also has a Giant Slide and Zipline! There’s also a Truassic Park, a 2.5-acre outdoor park. I love the name gag, “True-assic.”  It’s an “outdoor adventure park with a dinosaur theme!”

We are devoted to teaching creation science and intelligent design models on the origin and history of life (in contrast to teaching evolutionary models).

The location information is interesting too:

Makes it sound like the “Duchy of Grand Fenwick — Through the Gate and Around in Back.”

Yes, Religion now has to use Science to prop itself up. You can’t just hand around live rattlesnakes anymore, or Speak in Tongues. Well, you can, but it’s not as razzle-dazzle as a 60-foot dino skeleton unearthed and pieced together by, well, people who actually know something.

But they’ll use any tool at hand, twisting and warping it until it serves their purpose. They never stop.