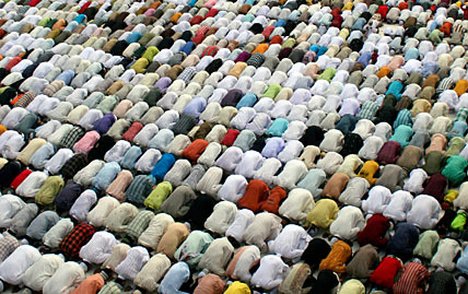 Here’s a story from the United Kingdom’s online news site Mail Online, the heated subtext of which is “OMG MUSLIMS!!!”

One country, two religions and three very telling pictures: The empty pews at churches just yards from an overcrowded mosque

It’s a story in pictures, with a small amount of text:

What they show are three acts of worship performed in the East End of London within a few hundred yards of each other at the end of last month.

Two of the photos show Sunday morning services in the churches of St George-in-the-East on Cannon Street Road, and St Mary’s on Cable Street.

The third shows worshippers gathered for Friday midday prayers outside the nearby mosque on the Brune Street Estate in Spitalfields.

The difference in numbers could hardly be more dramatic. At St George’s, some 12 people have congregated to celebrate Holy Communion.

When the church was built in the early 18th century, it was designed to seat 1,230.

Numbers are similar at St Mary’s, opened in October 1849. Then, it could boast a congregation of 1,000. Today, as shown in the picture, the worshippers total just 20.

While the two churches are nearly empty, the Brune Street Estate mosque has a different problem — overcrowding.

The mosque itself is little more than a small room rented in a  community centre, and it can hold only 100.

However, on Fridays, those numbers swell to three to four times the room’s capacity, so the worshippers spill out onto the street, where they take up around the same amount of space as the size of the near-empty St Mary’s down the road.

What these pictures suggest is that, on current trends, Christianity in this country is becoming a religion of the past, and Islam is one of the future.

Yes! Christianity is becoming a thing of the past! But ooh, scary Islam is the one of the future.

Maybe, maybe not. Not a big fan of Islam here, definitely don’t think it’s a good thing. But … the people caught up in it are just people. And people’s minds can be changed.

The newfound visibility of atheism alone, as one of the many choices young people will be presented with, can make a difference. But making an actual effort to outreach into the community of young Muslims — that could make a BIG difference.

Seems to me we need to do a lot more atheist proselytizing.