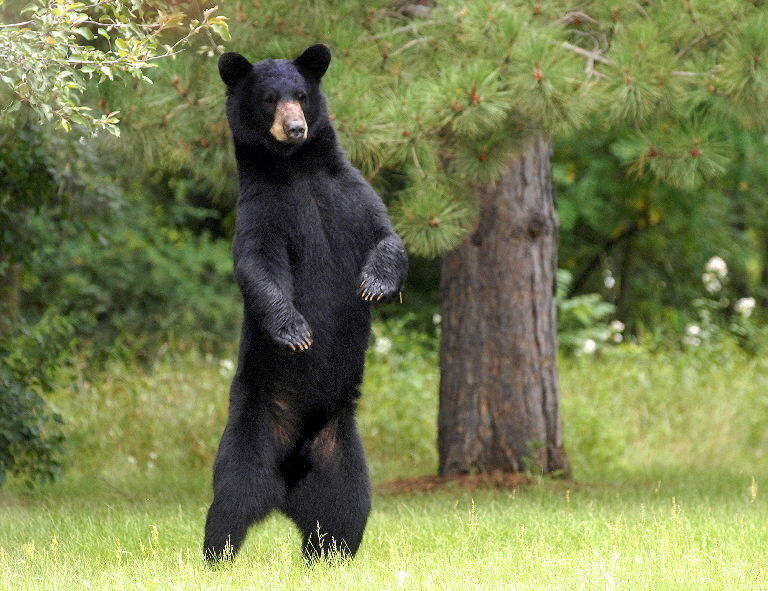 One of my pet peeves has to do with bears. You know — covered with hair, four big paws, occasionally shows up around human habitation and causes people to freak out?

It’s not the bears themselves, it’s the general reaction to them, the body of beliefs associated with them, that bugs me so much.

I lived in a little mountain town in California for 22 years, and there were usually a good dozen or so resident ursids cruising around, usually at night but sometimes in broad daylight.

I had one that came through my yard every night, a big boy I called “Mr. Bear,” probably the largest black bear I’ve ever seen. He would amble past my front door, sometimes as close as 8 feet away, and some nights I would open the door to say hello to him. He’d look over at me but continue his patient plodding and disappear into the night.

Not once in those 22 years did anyone get so much as a scratch from a bear. I never heard of a dog or a cat getting killed or injured. There was, on rare occasions, small amounts of property damage.

Yet INEVITABLY, when you say anything at all about bears, someone will chime in with “Yeah, but they’re wild animals. They’ll kill you if you’re not careful.”

The old-timey magazine covers certainly agreed. Every cover-bear might as well have carried the caption, “Killing machine with fur.”

In my view, beliefs about the deadly danger of bears constitutes a pocket religion, a “faith” that requires no evidence, spreads automatically and enthusiastically (get city people talking about bears sometime), and usually has little or nothing behind it other than the desire to hear, or tell, an impressive story.

Wikipedia lists Fatal Bear Attacks in North America, dividing them into Black Bear, Grizzly and Polar Bear categories, and including captive (zoo, animal park and circus) bears. If you’re looking for some statistical conclusion about the hazard posed by black bears, I hardly think it’s fair to include captive bears in the mix, considering how unnatural their situations often are. And certainly Grizzlies and Polar Bears are not the same animal.

Yes, black bears are dangerous.  But again, they’re safer than your neighbor’s dog. For the past 3 years, the number of people killed by dogs in the U.S. has hovered between 30 to 35. Already in 2013, there have been 14. In raw numbers, pit bulls and rottweilers are more deadly than bears. (In the year 2000 a baby was killed by a jealous Pomeranian!) And of course this statistic doesn’t include the thousands upon thousands of non-fatal bites and maulings.

Sure, dogs are more common in our lives than bears, and therefore more likely to be involved in fatal accidents. But all the more reason not to spread scary bear stories, isn’t it? You have to really work at it to get into bear country. And once there, the Forest Service or local guides will clue you in to the real dangers, if any.

Unless, of course, we’re talking about Australian Drop Bears.

There are ways to live with the bear population that is both safe for us and safe for them. Perhaps it could even evolve into a mutually beneficial relationship.