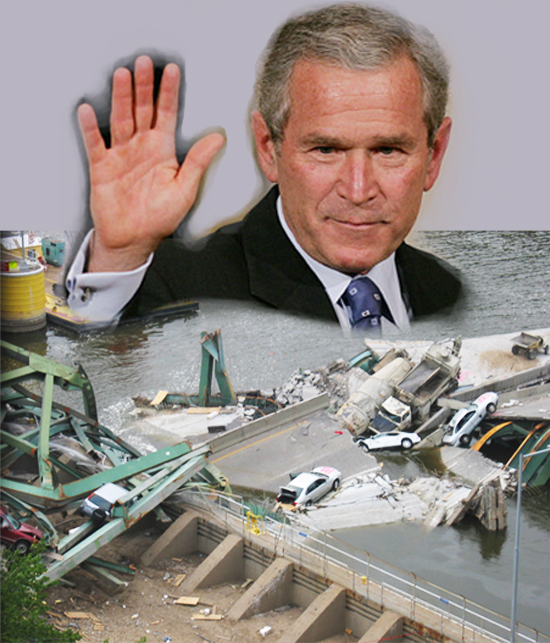 I know there are people who don’t like driving across long, high bridges. I’m one of them, I guess, but my job requires me to gird my loins and cross the huge, 3-mile-long, almost-60-year-old  Tappan Zee Bridge across the Hudson River near New York City twice a day.

The collapse of the Interstate 5 highway bridge in Mount Vernon, Wash., on Thursday, brought that roaring to mind over the past few days.

On days when traffic is slow and you’re standing still on the Tappan Zee — like yesterday evening during rush hour, with the roadway packed with the multitude fleeing the City for the Memorial Day holiday weekend — you can feel the thing flex and rumble under you. Not a day passes that I don’t think about what it would be like to fall 150 feet into the deep river, with deadly beams collapsing all around me.

Wikipedia says the Tappan Zee “was constructed during material shortages during the Korean War and designed to last only 50 years.” The really freaky thing about the Tappan Zee is that the roadway sometimes develops holes THROUGH WHICH YOU CAN SEE THE RIVER BELOW. They even have a name for the holes: punch-throughs. Sheee-it. Maintenance and repair crews work on the thing pretty much 24/7, but the beams overhead are covered with rust.

In 2009, the Tappan Zee Bridge was featured on The History Channel “The Crumbling of America” showing the infrastructure crisis in the United States. Many factors contribute to the precarious infrastructure of the bridge, which has been called “one of the most decrepit and potentially dangerous bridges” in the US. Engineering assessments have determined that “everything from steel corrosion to earthquakes to maritime accidents could cause major, perhaps catastrophic, damage to the span,” prompting one of the top aides in the New York state governor’s office to refer to the Tappan Zee as the “hold-your-breath bridge.” A 2009 state report noted that the bridge was not built with a plan that was “conducive to long-term durability” and that the Tappan Zee’s engineers designed it to be “nonredundant,” meaning that one “critical fracture could make the bridge fail completely because its supports couldn’t transfer the structure’s load to other supports.”

You catch all that? THE GOVERNMENT KNOWS IT’S DANGEROUS.  They haven’t fixed it. Just as so many bridges and overpasses in the U.S. haven’t been fixed.

But meanwhile, the United States spent close to a trillion dollars in destroying civilization in Iraq, at the orders of that brainless, gutless little shit George W. Bush. While our own infrastructure here at home was known to be crumbling, corporations that make weapons and military goods toddled off home with enough gold to make a pharaoh look like a filthy street beggar.

War has a price. Aside from the thousands of needless deaths of American’s young men and women, there’s the actual cost of war, and it is dramatically non-trivial. Estimates of the cost of the Vietnam War range from $150 billion to $584 billion. The cost of the combined Iraq-Afghanistan wars is upwards of $1.5 trillion. (Here’s a PDF with more on the cost of wars.)

Kids, if we’re counting the things we could’ve had if we hadn’t spent the  money on recent wars, that’s a FUCK of a lot of new bridges. High-speed rail routes and trains. Schools and teachers. Libraries. Parks and playgrounds. Hell, we could have thrown in free college educations for a million young Americans. So much, much more.

The reasons for this are way-hell more complicated than anything I can winkle out, but down at the most basic level, it seems to me it’s a failing of intellect, of the understanding of facts, of the desire to know true things and live in the real world. It’s the poison cranked every day out of a vast well of fantasy, wishful thinking and studied ignorance — plus the by-no-means-minor  willingness to be commanded, even owned — bequeathed to us by our thousands of years of religion.

None of this is anything we can afford for very much longer.

Nothing will stop it except sane, conscious effort.

By, you know, SOMEONE.