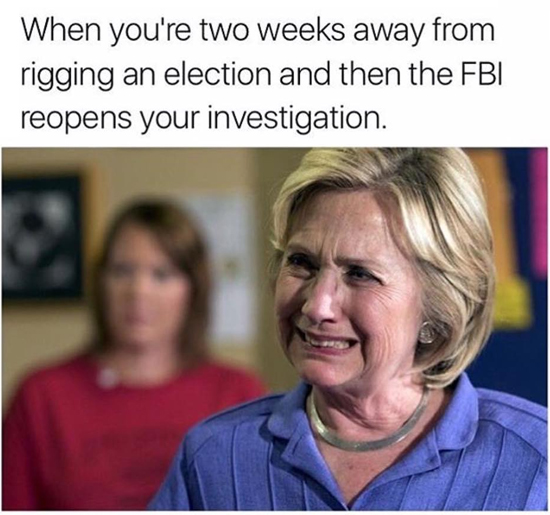 I replied to it:

1) Nobody is “rigging” an election. If that were possible, don’t you think the Democrats would CONTROL Congress? (Also, “the fix” is not in for the Clintons. If the fix was in, they never would have impeached Bill Clinton.)

About every 3 days during this election cycle, a new “story” has appeared, trumpeting >>> THIS IS IT!!! THE SMOKING GUN THAT WILL BRING HILLARY CLINTON DOWN!!!! <<<

… and NOT ONE of those stories has turned out to be anything other than smears and innuendo. Hateful lies.

Listen carefully: The GOP hates Hillary Clinton with a blinding passion. During the 25 or so years they’ve been after her, they have controlled the Senate, the House, the White House or all three for some substantial portion of the time. She’s been accused of everything from murder to selling off American parks to the Russians.

IF IF IF there was anything they could have nailed her on — hell, jaywalking, a simple parking ticket — SHE WOULD HAVE BEEN INDICTED.

The fact that she hasn’t even been charged with anything in all those years, with all those breathless stories about her supposed crimes, is just about rock-solid proof that there have been precisely zero illegal acts.

You’re letting people lie to you — over and over and OVER. Doesn’t that bother you?

Hillary Clinton is going to be our next president. She’s going to beat Donald Trump by a wide margin BECAUSE MORE AMERICANS ARE GOING TO VOTE FOR HER.

Including me. I will be so glad when this election is over and Hillary Clinton is president.

The replies were … typical. Here’s one, by the woman who posted the pic:

LOL was the only response I could muster knowing that when you’re that far gone, there’s no helping you anyway.. But I still find a bit of humor in it.

3. Only a Hillary supporter has enough time in a working man’s day to write a big long essay like that… On Facebook… On someone’s Facebook who they don’t even know or are friends with. I guess he’s trying to get her in office so his welfare check doesn’t get cut off.

4. I’m not stating my political stance either way, and I’m not here for a debate. I simply found a bit of humor here and decided to share it..So, my most serious question… What kind of person takes a meme so.. seriously!

I wrote a reply:

Second, regarding writing during a “working man’s day”: This was on a Saturday, my day off. I worked on my house, climbing under it and repairing some insulation. I also installed a towel rack in the bathroom and did laundry. Went out to eat. And still had time to write this “big long essay.”

Third, my “welfare check”: I’m 64 years old and have been working — often in blue collar jobs — since I was about 16. Still waiting on that big, sweet welfare check.

Next, that big long essay “on someone’s Facebook who they don’t even know or are friends with.” Besides the fact that it showed up on my own Facebook wall, making it fair game for a reply … lies are lies, and you have to fight them wherever you find them. Otherwise you and everybody you know will have to live in the world they create.

Finally, I don’t get the bit about me being a troll, or “he might not even be a he.” That’s some serious Way Out Of Left Field shit.

A bit later, I added,

Take note that my reply contained facts and solid political analysis, but that all the responses contained nothing but personal attacks. Not one of you made any attempt to refute my reply. Instead you went straight for the insults. Which sort of implies you’re not able to argue with any of it, right?

I came back later to see if there were any replies. My reply had been deleted. I wrote:

I notice you’ve learned to delete replies that embarrass you.

Came back later and that had been deleted too.