Well, this is making the rounds, so I’ll say a couple of things about it.

First, it’s a pure hit piece against Hillary Clinton, and it absolutely came right out of the GOP hate machine.

Second, it’s a hit against Margaret Sanger, the founder of Planned Parenthood, which all the more obviously means it originated with the Right.

Sanger was PROSECUTED in 1914 for her book about pregnancy and contraception, Family Limitation, under a FEDERAL LAW which forbade public access to information on contraception, on the grounds of obscenity.

There’s some question about whether she actually said or wrote this “quote.” I couldn’t find anything saying she did. I did find several articles pointing out that Sanger has long been a target of the “forced birth” party, the ones who passionately hate Planned Parenthood, and asserting that Sanger never said any such thing.

But let’s say she did say it. Here’s the thing: If you and I and everybody we know had been born in 1879, the probability is high that we would all be racists. Hell, we would have hated the IRISH. We would have highly approved of this supposed Sanger quote, and thought fondly of what the world would be like without “Negroes.”

By modern standards, pretty much everybod 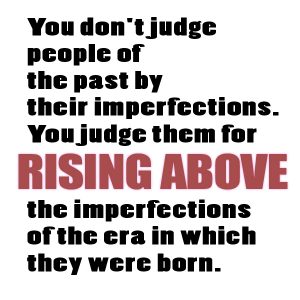 y in the past was, in one way or another, a tremendous asshole. But just as you don’t judge a children’s theatrical production  by the standards of a professional theatre critic, you don’t judge people of the past exclusively by modern standards. If you do, it speaks more of your ignorance of what progress means than it does the low quality of our ancestors.

Even if they grew above the crowd in only in one way — that’s all it takes for history to spotlight them with greatness.

Sanger did more for women’s health, safety and reproductive rights than any 1,000 of us sitting here reading this, and she did it in the face of massive conservative outrage and opposition. They would have put her in prison merely FOR GIVING WOMEN INFORMATION on how not to die in childbirth.

So kudos to Hillary Clinton for admiring her. I do too. Sanger was a giant.