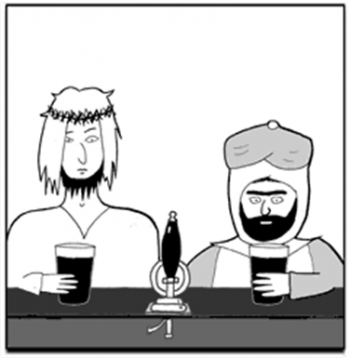 The question was posed in an article from The Muslim Times (which features such articles as A challenge for Dawkins: Where did carbon come from? and Conversion of Mr. Bean to Islam?)

Such conflicts are proliferating, and present an interesting challenge to our democratic society in the UK: do atheists have the right to offend Muslims?

On the face of it, this may seem a simple question, and most people probably will start reading this article with a fixed opinion on the issue. But it’s actually a rather complicated question!

That’s pretty much the meat of the article, and it trails off into a few more bland paragraphs. The author shies away from giving any suggestion of an answer, I suspect because reasonable people already know the answer: First, it’s the wrong question, and Second, when you ask the REAL question — “Do Muslims (or any other religious group) ever have the right to use ‘I’m offended!’ as a clinching argument to restrict the freedom of expression of others in public spaces”? — the answer is No, or at least, They Apparently Do But They Damned Well Shouldn’t.

The original incident was described on the website of the  National Secular Society:

A row over free expression has broken out at the London School of Economics after members of the LSESU Atheist, Secularist and Humanist Student Society were told they would be physically removed from the annual Freshers’ Fair unless they covered up t-shirts deemed “offensive”.

The group’s response was right on target:

We reject in the strongest possible terms that by wearing a non-violent, non-racist t-shirt we would harass other students or create an “offensive environment”. We reject completely that we were not behaving in an “orderly or responsible manner”. In fact, when faced with the entirely unreasonable request to change or cover up our clothing, we remained calm and asked for clarification on what rules or regulations we were alleged to be in breach of. Even though we completely disagreed with the instructions of the LSE, we still complied, making clear that we would challenge this decision through the appropriate procedures.

As much as we respect and defend the rights of others to wear whatever they choose to wear, we claim this right for ourselves. Our right to free expression and participation in the LSE student community is being curtailed for no other reason than that we are expressing views that are not shared by others. The t-shirts worn are harmless satirical depictions of fictitious religious figures and certainly cannot be considered intimidating, hostile, degrading, humiliating or offensive to anyone by even the most stringent standards.”

The LSESU Atheist, Secularist and Humanist Student Society is in the right here, and in the just world they’re working to create, the deeper question of freedom of expression — whether it involved Muslims or some other religious group — would never come up.

But in this case, a religious group complained of supposed intimidation and the university rolled over and REALLY intimidated this other, non-religious, group.

On a side note, The Muslim Times, which calls itself “A Blog to Foster Universal Brotherhood,” says on its About Us page:

We want to applaud the good writings of all the Muslims, the Christians, the Jews, the agnostics and the atheists and others, by sharing them with our readers.

So, hey, maybe I’ll be published on there someday.  Because they’re all over that brotherhood thing.