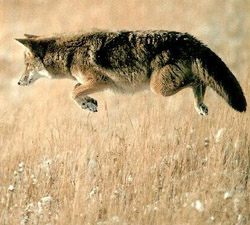 It was hot, the day the coyotes danced.

It was about 1990, and I was ranch-sitting at the Schober Ranch in Bishop, California. The owner was up in the mountains all summer, but there were cattle at the ranch, and somebody needed to be there to look after them.

In this particular case, ranch-sitting was a minimalist job. The cattle were out in a pasture with plenty of water and grass, and cattle don’t need much more than that. Really, all I had to do was walk the pastures once a day and make sure nobody was sick or injured or dead.

This side of the Sierra Nevada range is mostly “high desert,” which means not the rolling dunes of sand most people think of when they hear “desert,” but just really dry sagebrush country. The well-watered ranch, by contrast, was a green oasis, with shade trees and green grass, and to me who grew up in wet, green country, it was especially beautiful.

My dog loved the ranch too. Ranger was a 5-year-old German shepherd, my big bony 90-pound buddy with huge ears and great floppy paws and at least one other admirably large part (of course I mean his nose — what did you think?), whom I called Ranger the Valiant Warrior.

Most of the day I was busy at the ranch with my sign business, a portable endeavor that I simply brought with me when I agreed to watch the ranch for the summer. But twice a day I’d put down my tools and Ranger and I would walk out into the pastures and check on the cows.

It was sunny that day, with no hint of a breeze, and I wore a t-shirt for coolness, and my cowboy hat for shade. Elsewhere in the world, sweet little songbirds were no doubt casting twittering notes of joy into the summer air, but in the mountains, where the birdlife consists mainly of rough and raucous ravens, Clark’s nutcrackers and Stellar jays, none of which has a melodious voice, sweet song was totally absent.

The only sound to break the stillness was the occasional clicking flight of grasshoppers as we stirred them out of the grass. The sky was cloudless, and that impossible deep blue that only people who live at high elevations ever get to see. A viny tangle of wisteria covered a decorative arbor near the front screen door, and the sweet drowsy smell of it hung in the air.

I unlatched the creaky gate in the ranch house’s back yard, and Ranger and I strolled out into the back pasture. The ranch’s six black brangus bulls – pets all – were cloistered in this separate pasture to ensure they didn’t pass on their muscley genes at the wrong time of year. They concentrated stolidly on their grazing as Ranger and I approached, only raising their heads to make sure we weren’t their solicitous owner, showing up with treats. As soon as they saw we weren’t, the six heads went right back down into the grass. They kicked at biting flies, swept tasseled fly-swatter tails at their flanks and munched their way through life.

The dog and I passed through the cloud of sweet pungency that surrounded them, then through another gate into the side pasture, where we ambled toward the front of it along a well-worn cow path. I usually made one huge loop of this cattle-domain, first patrolling the borders to make sure the fences were intact before cutting in toward the herd itself to observe the individual animals.

We stopped while Ranger splashed into the irrigation creek to cool off. He had a playful way of drinking that was more a lunging snap than the more sedate lapping of other dogs, and he took a couple of jabs at the cold, clear water. This many years later, and now living in the east where all the creeks are murky and warmish, I marvel to remember that, in the high country, even this cattle-pasture water was clear and clean. I drank out of it myself a time or two.

The side pasture was divided into three large sections. This time of the year, the near section — where I now walked — was empty of cows, and the grass was resting and growing. The middle and far pastures were fenced away from each other, but the connecting gate was open so the herd could wander to whatever section they chose.

On this day, they’d chosen the middle section. The fence bisecting the near pasture from the two farther ones was covered in climbing ivy, and formed a solid visual barrier four or so feet high.

But something strange quickly caught my attention. Even before I looked directly at the cattle, out of the corner of my eye I could tell something was different. They were all standing with their heads raised, and other than the occasional flick of a tail, nothing was moving. Most peculiar of all, they stood in roughly concentric rings, and their attention was focused on some central point. Something in the middle of the herd was inspiring an impromptu theater-in-the-round, and the cattle were entranced.

Mountain lion? No, the cows were neither scared nor aggressive. Lone bear cub? Disneyesque rabbits in tutus? I couldn’t guess. But I knew I wanted to see it.

I crouched down and quietly approached the vine-covered fence. When I reached it, I ever-so-slowly raised my head so that my eyes were just over the leafy upper edge.

And there they were, two coyotes. Playing. Practicing canine karate. Dancing. Something.

For whatever reason, they were leaping, bouncing, dashing, pouncing, giving each other high-fives in midair and then springing back with bright eyes and laughing expressions on their coyote faces.

They bowed, wriggled, looked at each other sideways, tapped paws on each other’s backs, wrestled and bumped sides, stood up and briefly draped lithe paws on each other’s shoulders as if doing a waltz. And all of it looked as if their legs contained springs, or gravity had taken a short holiday – some of these actions were carried out four feet off the ground.

They were radiant, brighter than life as sunlight falling through the baked air caught the tan highlights on their grizzled coats.

If ever there was a moment of magic, this was it. The anemic “mysteries” of religion and mysticism pale beside it. Here were real animals doing something I’d never seen, never even heard of, in beauty and delight that even then I knew I’d never be able to adequately describe.

Animals have secrets. Certainly because it’s a necessity of their lives, living as they do in the continual knife fight which is life in the wilds, but also — and mainly — because no modern human has yet taken the time to learn about them.

But on this day, the coyotes briefly allowed me to play witness to their hidden world. To this day, the why of it escapes me. Whatever they were doing is a perpetual secret as far as I’m concerned, and I’ve never even asked a biologist about it — maybe for fear I’d get a Skinnerian dullard who’d make them out to be biological drones, mechanically responding to some chemical urge with no hint of choice or joy about it.

Eventually, my crouched legs began to ache, and I shifted position ever so slightly. But coyote eyes, ever tuned to danger, picked up the slight motion of my head over the fence. They stopped instantly, happy tails frozen, and peered in my direction for an instant. Tails and ears flat, they loped off in opposite directions. I felt like a skunk dropped into the middle of a birthday party.

After a few minutes, the cattle went back to grazing. Ranger and I went on with our walk in the warm day.

Maybe it WAS some sort of automatic pair-bonding ritual that would lead to mating. But it could also be the conscious, honestly happy greeting of long-separated siblings, or just the high spirits of young animals enjoying a playful midday break in the warm sun.

To my eyes, it was joyous, and I’d be very reluctant to see it any other way.

For me, on that day, and for whatever mysterious reason, the coyotes danced.