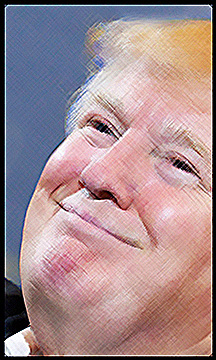 I’m interested in this latest development in the Trump saga. Some part of me appears convinced this is the end for Trump, because I’m actually feeling a little bit sorry for him.

I mean, what’s happening is well-deserved and all, but … there’s something of the hapless, coddled child in him. I don’t think he’s bright enough to have known that one of the possible outcomes of all this — saying and doing the things he’s saying and doing, out in the blowtorch of public view — was his utter destruction. Meaning: Not just the loss of this political race, but the loss of his fortune and, potentially, even the loss of his freedom via a prison sentence. Not to mention the complete evaporation of respect for him, such that he becomes a living joke, so nobody will ever again do large-scale business with him. I have to doubt even Fox News would hire him after this; his brand is that damaged.

There’s another element I find slightly disturbing, though, and it’s the same thing Hillary’s faced for so many years — The Mob. In this case I don’t refer to any criminal organization, but to a mass of people acting in unison while consumed by blindingly powerful emotions — spitting visceral hate in both these cases — which overturn reason and produce instead an undiluted rage when the hated person prospers and a sort of furious glee when anything bad happens to him/her.

The Mob scares me. Not only do I never want to be part of it, it disturbs me when I see OTHERS caught up in it.

I got to see it up close and personal when I got sideways with a bunch of feminist bloggers a year or so back. I was completely flummoxed at watching people I knew personally — women and men I had formerly considered extremely rational — turn on each other with a viciousness I’d never witnessed. They would come after you in a screaming mass for using a single WORD they considered inappropriate. Thanks to them, I will never call myself a feminist — despite being completely in agreement on the subjects of women’s rights, equality, safety, health and choice.

Don’t get me wrong — Trump is a nut who would pose an immense danger in the White House, and he has to be stopped.

But I don’t like that THIS is one of the prime tools by which it is being accomplished.