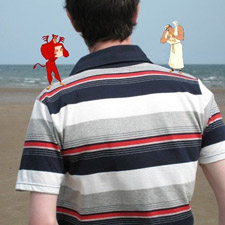 I’m experimenting with something internal, and some interesting stuff is coming out of it.

You know that “little voice” we all have? Or maybe it’s little voices, plural, since the thing is characterized in cartoons as an angel and devil on opposite shoulders, both telling you to do different things.

I may have said this in the past here, but I think of us humans as having “humany” and “beasty” parts. (That second one is correct as spelled; it’s not “beastly.” And yeah, I make up my own words sometimes. Hey, I’m a writer.)

[One of my many, many problems with religion is the focus on the beasty drive of allegiance, specifically divorced from the humany capacity for reason. You’re supposed to believe — and obey — without thinking independently about it. Without asking questions. It turns people into sheep.]

You can’t have sex just whenever and wherever and with whomever you want. You can’t eat with beasty abandon. Indulging either drive, in the absence of humany reason, has harmful side effects.

You can’t even love without stint, in my opinion. Love has to be accompanied by humany wisdom, which fact is demonstrated by the cliché of the young woman who loves so much she fails to take into consideration traits such as dishonesty and violence in her boyfriend – or the opposite cliché of the older man so enamored with  his lush young girlfriend that he can’t see she’s only in it for the money.

Just FYI, I deliberately made up the words “beasty” and “humany” some years back to avoid using words already freighted with so much meaning I can’t use them to talk about what I mean, because inevitably readers would hear something other than what I’m trying to say. In this case, “beasty” and “humany” are NOT animal traits and human traits. Since we humans ARE animals, trying to separate our traits out like that creates a false — misleading and useless — picture in our minds.

Instead, beasty and humany traits are both human traits. They all reside in the same human brain, and I tend to think of neither of them as “higher” or “lower” than the other. They’re there together, coexisting as equals in our heads.

The beasty traits are there from birth, and stage themselves almost automatically.  The humany traits are inborn in us as potentials, and take a certain amount of work to build up to. Beasty drives translate to a basic and unspoken “I want,” humany drives are  closer to an explicitly stated “I should.”

So your shoulder devil says, in an unverbalized drive, “Go on, you know you want to eat the chocolate cake. One little piece won’t hurt. And a scoop or two of ice cream on top would be great too. ” And your shoulder angel says, likely in clear words in your head,  “No, don’ t have the cake! I’m trying to lose weight!”

In our pre-adult and early adult life, the humany words and drives in our heads are likely to have come from our parents or teachers. The voice in your head that says “Don’t do everything your friends dare you to” might actually BE the voice of a parent, in his/her exact words and vocal inflections.

But as we mature, those parental voices are replaced by reminders based on our own growing experience of life. We start to know the prices of things — gambling, sex, drinking, fighting, jumping off a bridge into the murky river on a dare, etc. — on our own. We warn ourselves away from too much of the beasty things because we come to know what each one will cost us later.

I’ve had the “little voices” as far back as I can remember, but it’s remarkable how often I’ve ignored the humany one. There have been times when I’ve stood literally frozen in place, having the internal argument of desire vs. wisdom, and all too often decided in favor of desire.

The problem, it seems to me — I mean besides the fact that you put yourself on a downward spiral if you always listen to the beasty part – is that if you ignore your own better counsel, bad things start to happen, one of which is that you start to trust your own advice less. The little voice gets … littler.

I’m no expert on this, but I think you’d have to be a bit of a psychopath for your little voice to disappear entirely. But it certainly gets easier to ignore. If you always choose on the side of your beasty drives, your little voice stays little. Just as muscles require exercise to grow, so does your little voice.

So my little voice, whether it was advising me about losing weight, or getting fit, or … any sort of self-discipline or growth or work, really, was reduced to a tentative little thing that I ignored on a daily basis.

But recently I began considering: What if I started paying attention to it? The very thinking about it seems to have flipped a switch in my head.

I think all of us unconsciously assume that when you feel something like hunger, you have to satisfy it. We believe we have to fill our bellies, even if it’s with rice cakes. We have to have something to nibble on, or we have to distract ourselves from the uncontrollable urges of hunger, or else fall back into gorging. Every weight-loss commercial you ever saw seemed to say you couldn’t resist your own hunger … unless you had their diet or pill or gadget.

Yet I remember years back when I was fasting for a week, I noticed when I was feeling extreme hunger, but it wasn’t important to me. It was just something I stood off and watched, bemused. I was looking inside myself at the hunger and going “Huh. Look at what that’s doing. Fascinating.”

Which meant I could simultaneously feel the powerful demands of my beasty parts, and yet not be motivated to act on them. I could be hungry, in fact really hungry, and say “Hey, I’m really hungry!” and yet see it as nothing more than a curiosity. I learned you could feel a feeling without acting on it.

I recreated the process in my head in the present. About two weeks ago, just for the heck of it, and just in the area of diet, I decided to ignore the beasty shoulder angel, and listen exclusively to the humany one.

But darned if it didn’t work. Not only did I learn that I didn’t have to act on every beasty demand, but I observed that my little voice seemed to get a bit stronger every time I listen to it.

There’s some part of me that doubts this is permanent. I’ve so often failed at this (if you’ve been reading here for a while, you may have noticed that the “Too Much Hank” posts, about losing weight, vanished without fanfare), and plenty of other self-discipline type things, that I can’t be totally convinced I’m not going to do it again.

And yet … having understood something about how the beasty and the humany parts fit together in my head, I kinda have a hard time believing that I won’t be just fine.

Meanwhile, in two weeks, close to 10 pounds have dropped off.

I’m sitting here right now, really hungry. And not caring all that much.