Thanks to PZ Myers of Pharyngula, and all the great commenters t 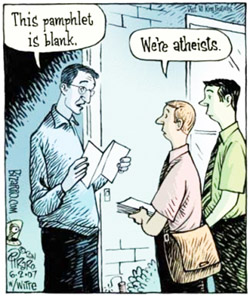 Thanks to Carl Sagan and Isaac Asimov, Terry Pratchett and Richard Dawkins. Thanks to Ray Bradbury, and Robert Heinlein, Anne McCaffrey and Diane Duane, George Chesbro and Jim Butcher. Thanks to David Brin and Larry Niven. Thanks to Robert Service and Mark Twain. Thanks to Arthur C. Clarke, and to Chris Clarke.

And what the hell, thanks to Stan Lee, and Siegel and Shuster! Thanks to Bill Watterson, Berkely Breathed, and Walt Kelly.

Thanks to Mrs. Nicholas who took my friend Johnny and I to the library every Saturday when I was a kid. Thanks to Miss King, geometry teacher, who taught me that sometimes there really is only one right answer. Thanks to my “dad,” Dan Farris, for the years of tolerance, and to Lou and Mary Roeser, for the years in the saddle.

Thanks to U.S. voters, for electing Barack Obama, and finally ridding us of the stupid, vile, lying freak (and his stupid, vile lying cronies), in the White House. Thanks in advance to all those who will try to hold them all accountable. (And thanks to John McCain for picking Sarah Palin, and to Sarah for being such a ditz.)

Thanks to Ralph Nader. (Ralph, you may be out of favor these days, but I will never forget the good you’ve done.)

Thanks to John Muir, and Teddy Roosevelt, for wilderness.

Thanks to every bird and lizard and furry thing that has given me delight by allowing itself to be seen on all those outdoor hikes. Special thanks to the bears, and special-special thanks to Mr. Bear, my shaggy brown mountain neighbor, for strolling past my door on so many summer nights. And speaking of bears, thanks to Tim Treadwell, for living and dying in intense self-determination.

Thanks to every doctor who ever lived, for being willing to go to school for decades to keep us all alive and healthy. But also thanks to the people who invented contraceptives, for helping us to not overrun the planet. Yet.

And thanks for all those who went to Vet School instead, for your loving attention to all our dogs and cats – with special thanks to Dr. London, Dr. Moak, Dr. Bart and Dr. Karyn.

Thanks to Charles Darwin! Thomas Jefferson. Abraham Lincoln. John F. Kennedy. Martin Luther King, Jr. A special shout out to George Washington for saying “No, thanks” to an offered crown.

Thanks to my friend Carl Buell, for his years of brilliant friendship to both me and my dogs. And thanks to Ranger and Tito, the aforementioned dogs, for all the outdoor fun, and whole lifetimes of love and friendship.