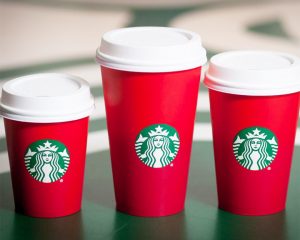 And so the annual “War on Christmas” begins — the viral claptrap that comes out every year like Christmas lights, earlier and earlier. Here’s this year’s volley.

A number of articles from mainstream news sites — New York Times, Washington Post, Time Magazine, New York Daily News — say “some Christians” or “Christian evangelists” take exception to Starbucks’ new plain red cups … but they never actually name the “some Christians” they’re talking about. Is it the Catholic Church in all its might? No. The Southern Baptist Convention? No. It isn’t even Pat Robertson.

Apparently it’s this one guy, Joshua Feuerstein, a “public figure” who does stuff like this to promote his own video rants on Facebook and elsewhere. Obviously Starbucks is getting massive amounts of free publicity, which makes me wonder if Feuerstein is getting paid to play out this song and dance on screen. But mainly, Feuerstein is an instant media celebrity on CNN (CNN MYSTERIOUSLY CUTS AUDIO WHEN FEUERSTEIN SAYS >>THIS<< ABOUT OBAMA!!!) etc., and will probably go on to write books and scam his way into lots and lots of money through the empty fame machine. He’s now famous for … well, for being a loud and insistent ass, with no real point other than artificial — MANUFACTURED — outrage.

We’re all talking about those Starbucks red cups, though. I’m sssooooooo proud of us for, you know, CARING so much about the color of Starbucks cups. We may not have a point, but man, we’re ANGRY. We’re INTERESTED. We have OPINIONS. Bully for us, right?

I don’t care about the color of the cups. I don’t care much about Feuerstein. I do care that so many of us are getting sucked into this as if it’s some critical issue that MUST consume our attention.

I care that there’s a mechanism for putting us in this situation of being interested in nothing.

It’s a little bit like a magic act, where the magician does some vigorous waving with his left hand to distract our attention while he does the magicky stuff with his right. Only in this case, there’s no magicky stuff — it’s just that  distracting left hand up there waving.

But hey, Earth People, do your thing.