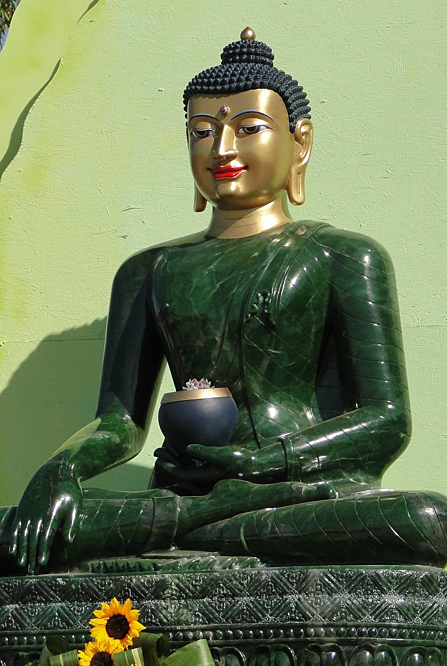 I’m okay with Buddhists, generally. But guys, really? A statue of Buddha (there are a few around, in case you don’t know) was the best the human race could come up with for the largest single piece of jade ever discovered?

… a mammoth boulder of nephrite jade sourced in Northwest British Columbia, Canada. Dubbed the Polar Pride boulder when it was discovered in 2000, gem experts called the 18-ton specimen “the find of the millennium.”

I’ll admit I’m coming up short in figuring out what should have been done with it instead. My best imaginings include a carving of a black bear, or a family of river otters, realized in such a way as to convey an environmental message. But still …

The Polar Pride was split in two and sold for an undisclosed price to an international Buddhist organization headed by the Nepalese monk Lama Zopa Rinpoche. In 2006, the twin blocks were shipped from Vancouver to Thailand, where master craftsmen began their two-year labor of love – freeing the smiling, meditating figure of Buddha from an enormous block of gem-quality jade.

To those who argue that Buddhism is not a religion, here’s at least one counter-argument. This bit is pure religion:

Rinpoche said that the statue made from the majestic boulder would illuminate the world and bring peace, happiness and solace and help prevent destruction, including war.

Yeah, I’m sure it’ll do that. Jade statues are known for their mystical, war-preventing powers.

More than that, though, you kinda have to assume the price was in the millions. I have a church a few blocks from my house valued at more than 7 million. I can never pass the thing without thinking of how many college degrees in medicine or environmental science the money would have financed. Ditto for this largest-ever jade Buddha statue.

Presented with a never-before-never-again opportunity, the best humans can come up with, once again, is religion.