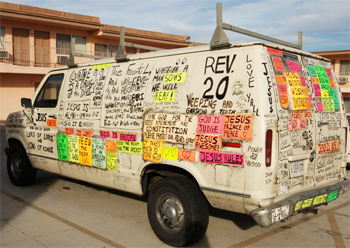 We’re born to sanity. We instinctively feel that things should be reasonable. That it should all MAKE SENSE.

Most of us, as we grow to adulthood, at least TRY to be sane and sensible. But we all know we share the world with some crazy-ass others.

In my view, the biggest reason for rampant craziness in the world is religion. Religion is not only mistaken about basic facts of reality, it sets up a social field of acceptance to casual lies, deliberate falsehoods, even malicious acts, by both the priestly and the pious.

Churches TEACH falsehoods, and they garb themselves in the appearance of the highest good as they do it.

Deliberately denied the tools that would help them critique church claims, credulous followers are set up to become victims of all the other liars and con men … who often don the same mantle of goodness. It creates an entire society where lies are easy, even expected, and where all manner of inglorious acts can be defended, because nobody really knows what’s right, what’s just, what’s good.

But even deeply immersed in the inner workings of churches, there are those who find they want sanity. Discovering eventually that they are too reasonable to believe, they reach the point where they either sacrifice honesty as the price of keeping their jobs and positions, or they quietly leave the career.

More than a decade into the new atheist movement, though, outspoken atheists have created a field of acceptance to non-belief great enough that it has lowered the barrier to admitting loss of faith, even to those IN the faith.

More than 200 church leaders across the country now say they no longer believe in God, including a Houston-area pastor who was one of the first to publicly announce his decision.

Mike Aus, who was pastor at Theophilus church in Katy, Texas, went so far as to make an announcement on TV about his loss of faith, during an appearance on MSNBC’s Up With Chris Hayes Sunday morning show.

Aus was a long-time Lutheran pastor at churches in the Houston area, but now he said he no longer believes in the message he had been preaching for almost 20 years.

“As I started to jettison the beliefs, I came to realize fairly recently there wasn’t a whole lot left,” Aus said.

The effect was immediate on his church with about 80 members. Weeks after his announcement, the church dissolved. Members […] said their pastor’s complete change in faith was devastating.

I’m just wondering what happens when hundreds of millions of church members realize they’re not alone in wondering what the heck it is they’re doing, and why. Why they never “felt the presence of God,” or why prayer never felt real to them.

It starts to look like we’re building up to that point.