If you believe a thing, it has some real effect on you.

I could win the Lottery. Hey, somebody has to, why not me?

That belief, a small-to-middling one as beliefs go, will cost a lot of people somewhere between $300 to $1800 in the coming year.  If your state or local taxes went up by $1,800 this year, would that bother you? Well, yeah. But a $5-a-day Lottery “player” would give that same amount, to the same institution to which he pays his taxes, and think nothing of it. Because he believes he’ll win a lot more. It’s not a tax, it’s more like an investment … in the wonderful (poorly-understood) world of probability.

If you believe a thing, it affects you …

… but if you believe a thing strongly, it affects you a lot. It could affect pretty much every aspect of your life.

I’m going to start a band and be rich and famous.

Hey, if you’re going to be rich and famous, why do you need high school? Or a college fund? Or the good will of your parents or peers? Better to spend that time and money practicing, and buying better instruments and amps. And to hell with anybody who stands in your way.

… it creates an entire culture wrapped around that belief.

Something must be done about these treacherous, secretive, manipulative Jews.

The Germans of the 1930s didn’t just sit at home and be mildly, privately amused by this belief. No, they built an entire society on the idea. One of the side effects was that 12 million people were murdered, and another side effect was a war that directly or indirectly killed another 70 million.

People with dark skin are inferior to those of us with lighter skins.

The North Americans of the 17th, 18th and 19th Centuries didn’t just chat about this quaint belief over tea and biscuits. No, they built an entire society on the idea, one side effect of which was that almost 4 million of those people with dark skin – in the 1860 Census alone – were trapped in slavery.

And for some of them, it really did look like this: 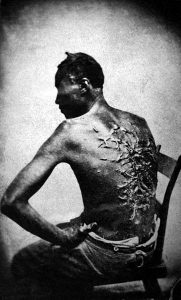 But the interesting thing is, most people of the time, both in Germany and the U.S., thought those beliefs were normal, and more than normal. Not only did they see nothing bad about it, they thought it was right, even good.

Strong, widely-held beliefs affect everything, every part of the society in which they hold sway, and even lots of people outside it.

Any person descended from Africans, whether slave or free, is not a citizen of the United States …

Looking back on it, you have to ask “What the hell was wrong with those people? What were they thinking??”

What was wrong with them was just this: They were crazy as hell. But because just about everybody was crazy the same way, very few people noticed. Which made it even worse — for 4 million people, a literal nightmare.

The strongly-held and widespread belief about slaves in the U.S. wasn’t just a little bit bad, it was a nightmare.

Likewise, the strongly-held and widespread belief about Jews in Germany wasn’t just a little bit bad, it was a nightmare.