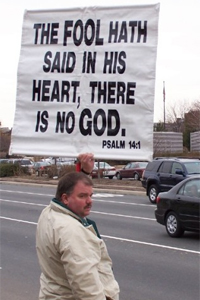 “People who believe in God are happier than agnostics or atheists, researchers claimed yesterday.”

So begins another of the half-dozen or so stories I’ve seen on the subject over the past couple of years. This particular study, titled, revealingly enough, “Deliver Us From Evil: Religion as Insurance,” was carried out with data from Britain and Europe by Prof. Andrew Clark of the Paris School of Economics, and Dr. Orsolya Lelkes of the European Centre for Social Welfare Policy and Research.

If you’re religious, or inclined to faith, the persistent stories sound very positive. By believing, even if none of the rest of your religion is true, apparently you’re bolstering the chances of a rise in the level of your own contentment.

If you’re an atheist, on the other hand, it seems like yet another smug, annoying advertisement by the godder lobby: “Ha-ha unbelievers! We’re happier than you are! See? Science proves it!” If we aren’t already innately less happy because of our lack of faith, we can thank our goddy brethren for MAKING us unhappy with their insistent carping on how bad and wrong we are compared to them, simply because we don’t have their religion resident in our heads.

But aside from all that, the research, presented at the Royal Economic Society’s annual conference in Coventry, England, has at least SOME science behind it. If the study was rigorously done, it provides a hypothesis worth considering by people on both sides of the god divide.

In addition, the very fact that this study was done creates an interesting specificity in the observance of that divide. Since the study is offered in the framework of scientific research, it is critiquable within that same framework. By the very fact of it being done, the study itself disqualifies any claim of faith from the debate that might follow.

If we move the discussion of Biblical or other kinds of religious belief into the domain of science, any SCIENTIFIC discussion of the subject must include only the facts and mental mechanics of science.

The looser mental mechanics of faith either have to be kept out of the discussion, or else we’re no longer talking about science, and the discussion is ended.

The question isn’t whether any particular person has a right to practice and speak of his religious beliefs. It’s a given that they do, at virtually any and all times. The question is: In this particular case, the discussion of a scientific study, do you want to talk – in the exacting terms of science – about this scientific study that purports to scientifically support the necessity of religion? Or do you want to talk about your own particular faith-based beliefs?

It’s church or laboratory, one or the other, and if you choose church, there’s no need to even pretend you’re talking about science.

But if you choose science, you can’t just pop off with a likely-sounding conclusion to your one study and stop there. You — or somebody — have to follow up with other studies, attempting to find answers to all the questions that arise in the course of the study.

Off the top of my head, even I, non-scientist that I am, can think of a number of questions about this study. And again, since we’re talking about science, the answers to these questions have to come from the very science that inspired this study:

One obvious question — so obvious it’s been stated many times — is the one about whether the happiness that supposedly comes with religion is even desirable. Alcoholics are often happier than non-drinkers, but that doesn’t mean there aren’t some heavy side effects to that happiness, both in their own lives and in their larger society.

Another question: Does the happiness of believers have any bearing on the truth of the belief? I can tell you already it probably doesn’t. Facts don’t change because of how people feel about them. And there’s a pretty weighty argument to be made in favor of knowing the truth, even if it makes you unhappy.

If I have a big purple bump on the side of my face, it’s better to go to the doctor NOW, even if what I find there might put a dent in my previously blithe ignorance of the fact that I have (curable-if-caught-early-enough) malignant melanoma.

More questions: If people are happier the more they pray, does the same effect hold for people who meditate rather than pray? For those who do Yoga? For those who take 20 minutes each day to reflect and plan? In other words, is it prayer that causes the happiness, or is it any regular directed meditative or contemplative activity? Or is it just any sort of replenishing daily break – would it work for people who have sex every day? For those who lift weights, or take a nap, or go for a daily swim?

If people who go to church are happier, does the same effect hold for people who attend regular meetings of the Elks Lodge, or Girl Scouts? Those who play basketball regularly with friends? Those who go to the VFW twice a week for drinks with old Army buddies? Those who participate in ANY social activity with a group of friends or other supporters? In other words, is the critical factor attendance of a CHURCH? Or is it participation in ANY regular social or supportive cultural activity?

The insistent message behind this study always seems to be that it’s better to believe in Jesus and God. But does the study show that? Or would belief in Allah have the same effect? Buddha? The sun god Ra? Elvis? The Flying Spaghetti Monster? Benevolent space aliens? The U.S. Army?

Finally, if they’re going to conduct a scientific study that purports to show the superiority of religion over unbelief, was any effort made to winkle out effects in the reverse direction? Was any effort made to find out if there are any ways in which unbelievers come out ahead?

In this case, the article did actually mention that out-of-work believers were less likely to look for a new job than unbelievers.

Which leads me to ask: Are there other ways in which unbelievers are more self-sufficient and internally driven than believers? Are unbelievers better at paying their bills? Taking care of their children’s physical and emotional needs? Staying married? Avoiding accidents? Better at catching the early signs of serious diseases and going to the doctor, so they have higher survival rates? Better at taking care of pets? Better at recognizing their limits in providing quality child care, so that they proactively decide to limit the number of children they produce?

The article also said that countries with greater numbers of religious people had lower unemployment benefits (and also, since we’re talking about happiness, here, that religious people are more likely to stay in an unhappy marriage than to divorce and start over with a chance at happiness elsewhere).

Does that mean that societies with greater numbers of unbelievers are more socially responsible in other ways?

Are atheists as a group less likely to litter? To drive dangerously fast on shared roadways? To start wars?

Finally: If faithheads are happier than glum skeptics, but there are serious things wrong in the world, is this type of blithe happiness a GOOD thing?

Until the studies get done to answer THESE questions, I’m going to withhold judgment on the need to give myself to Jesus and start going to church.

On the lighter side of this same story, I quote from another article:

But the numbers of people who believe is falling even faster than attendance at weekly church services. People who identified themselves as members of the official state religion have dropped by 40 per cent since 1983. A 2005 study said that only 50 per cent of children are likely to retain the religious faith of their upbringing. The report suggested that the decline in religious belief through the generations is already too far gone for any reversal.

The author of one study, Dr. David Voas, said the loss of faith in Britain “is not temporary or accidental, it is a generational phenomenon – the decline has continued year on year. The fact that children are only half as likely to believe as their parents indicates that, as a society, we are at an advanced stage of secularisation.” In 2000, a survey found that half of all adults in the UK say they have no religious affiliation, a 13 percent increase from 1983.

Speaking as an atheist, an unbeliever, someone who sees the harm that religion does, THAT makes me happy.

I’ll have a spring in my step all day.