I’m chuckling, but in a grim way. 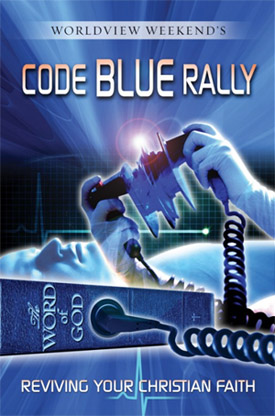 I get these emails from something called Worldview Weekend, a Christianist organization that sees a plot to murder God – and white people – in every shadow. I signed up in  a weak moment a year or so back, just to keep tabs on what they’re selling.

Some of the lines from this week’s plate of steaming neo-con Jesus (I confess I added all the exclamation marks, just because it seems funnier that way):

Liberals to Spend $1 Trillion And Can Not Say it Will Produce One Job!!!

Uh, hello? How many net jobs were created by the several trillion that Bush spent?

Distracting and Destroying the Middle Class, by Brannon Howse

Congressman Rangel says financial crisis is opportunity to implement socialism and tyranny while the middle class is distracted by just surviving. Reich, Obama’s economic advisor, says infrastructure jobs should only go to minorities.

Click here to register now for a Code Blue Rally!!!

What is a Code Blue Rally? You don’t want to know. Well, maybe you do. Check out the graphic above, or Go Here.

Huh? Obama is the “Islamic Jesus”? Boy, that sounds bad, huh? Don’t know about you, but I’m WORRIED.

Lies, paranoia, more lies, anti-science, anti-reason, anti-media, anti-progressive, on and on and on.

All for sale, to weak-minded people who can’t see that they’re being used by a bunch of psychopaths who wouldn’t know what compassion was if they took a two-semester college course in it.

And some people buy it.