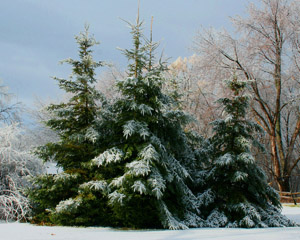 A major ice storm. Forty-two hours without electricity. A tree-fall in my neighbor’s yard, and because the base of it touches the property line, the expectation that I’m somehow on the hook to help get it removed. The breakdown of my truck.

And yet it was just about the most perfect two days I can remember in a long time.

I’m moving in with a friend, fellow bachelor-buddy Carl. I’ve been painting and preparing the ground at his house, transferring a few boxes as I go. I got my office moved over earlier this week.

So he called me Thursday and said “Look, it’s going to be really nasty tonight. A severe winter storm is predicted, so you might as well bring over some blankets and stuff and plan on camping out. You’re not going to be able to drive back home.”

Instead, I brought my whole bed, and went ahead and set it up in his basement.

On cue, the storm swept in. Snow, freezing rain. Ice collecting on the trees. And late that night, snap! — overloaded limbs started coming down. Somewhere out in the dark, one of them eclipsed our electrical trunk and the power went out.

We started a fire in the fireplace, lit a candle for a bathroom night-light, and — other than lamenting temporarily vanished computer and web abilities — ignored it. By morning, huge limbs in his front yard were down. But meanwhile, we’d stacked our respective beds with blankets, and rode out the cold night in toasty comfort.

We weren’t the only ones without power. Entire cities seemed to be blacked out. Disaster was declared. Across nearby territory here in Upstate New York, something like a quarter of a million people spent the night in the cold and dark. Shelters with generators opened for refugees with critical needs for heat and power.

By morning, tree limbs were bowed to the ground with a quarter-inch coating of glass-clear ice. Bushes were frozen confections, glittering silver fractals shot through with sunlight.

And the power was still out. There would be no work today, either computer or painting. There also wouldn’t be any hot showers or cooking.

We conferred with friends and neighbors by cellphone and face-to-face contact, and the word “disaster” was on many lips. Yet I called around to local towns to see who had power and we drove about 30 miles up the highway to eat lunch and afterwards browse lazily through a book store. We came back past my house to survey the damage from the fallen tree, about which my neighbor had sent me an excited message. Eh. It was only about a third of the tree, and it had fallen in its owner’s yard. Besides, Act of God and all that, it didn’t seem like anything I needed to worry overmuch about.

We visited briefly with Carls’ octogenarian uncle and neighbor, then decided to drive up the road a few miles and have dinner at Wendy’s. Only a quarter mile from there, though, my headlights began to dim and the battery warning light flashed on the dash. I was all for stopping and checking to see what was wrong, but Carl talked me into turning around and driving back home immediately. By the time we neared his house, not only were my headlights completely out, but the dash lights and all my instruments were dead.

Fortunately, a half mile from his house is my auto mechanic’s. We coasted into their parking lot, locked the truck and dropped the key in the slot with a note, and walked home in the cold and dark.

But there was already a full moon high in the sky, reflecting off the snow and lighting the night to delightful brilliance. And not just “a” full moon, but THE full moon – this full moon was one of those every-15-years perigee moons that hovers 28,000 miles closer than normal, making it look 14 per cent bigger than usual and a stunning 30 per cent brighter.

We got back and dropped in on his uncle again, telling him the comical story of the truck, and then trooped back home. 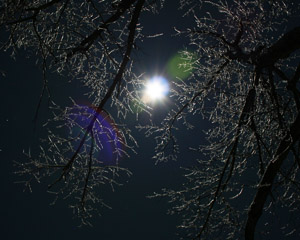 I went back out into the freezing cold with my camera, gloveless but untroubled, and took time-exposure pictures of the moonlight through the crystal-sculpture trees. Carl came out and we marveled at the perfect cloudless night.

Have you seen moonlight on snow? Magic. The glow of the moon reflects back up with what seems almost daylight brilliance. Crystal-silver sparkles pepper the smooth carpet of white and wink at you with the slightest movement of head or eyes. The crisp air carries sound a long way, and yet the night seems unusually silent too, giving the whole scene a cathedral-like expectant hush. Any moment, you feel, anything could happen. Tall, slender Tolkienesque elves dressed in polar bear fur might materialize out of the darkness. Santa and his reindeer might sweep in from overhead. Friendly albino Bigfoots might stroll casually out of the hillside woods to borrow peanut butter, or coffee.

I can never get over the juxtaposition of my life and that of the critters who have to live outdoors. I can go out for as long or as short a time as I like, and walk around in a happy daze of appreciation, whereas they live under constant threat.

I live without power for a couple of days, all the while happily assuming its comforting return, but for them, life is a scramble for food conducted in the midst of a knife fight, and blood splatters frozen into the snow are a daily event. For some, the harshness is punctuated by moments of comfortable huddling in dens. For others, like the whitetail deer, every degree and drop and flake is directly experienced standing in the open. I am fat and rich and clothed and warm, and the worst of the experience is the loss of email and web connections. For them, the draining cold is constant, as is the necessity to fight against it.

Back inside, we tossed fragrant logs into the fireplace and kindled another comforting blaze, then simply sat in front of it, toasting our toes.

Glancing out into the yard where he frequently sees wildlife, Carl hissed at me “Hank, there’s a grey fox out here!” I jumped up and peered out the dark window to watch the fox prospecting in the yard amid the seed Carl puts out for the birds. We watched her for a good 20 minutes, comparing her posture and bearing to the red foxes with which I’m more familiar, and which I’d seen here on many previous days and nights.

I’ve said nothing so far about the main attraction of the day — the company. You might have a thousand neighbors, a hundred close relatives, a TV, a computer, a cellphone and a Twitter account, but all those pale beside the conversation of a bright, informed, open-minded, inquisitive friend. Driving in the truck or sitting in front of the fireplace in a dark house, I was having the time of my life talking to and listening to my friend Carl. Carl knows things I didn’t even know were there to be known, and he has fascinating views on a myriad of subjects.

We sat in the warm glow of the firelight until 3 a.m., ranging the world in words and ideas, and kept each other awake and enjoying the day until … well, until it was well into the next day.

Late in the night we had a brainstorm and both fetched pillows to warm in front of the fire. By the time we went to our cold beds, we had toasty-warm pillows to accompany us under the covers.

Up this morning, I took more pictures of the winter-glazed trees. We trooped over to Carl’s uncle’s house, which has a generator, and took hot showers for the first time in two days.

Carl has feeders for wild birds, and we spent a good part of the day just enjoying the blue jays, cardinals, tufted titmice, yellow finches and several kinds of woodpeckers who swept in to his second-floor deck to take advantage. Fat gray squirrels and two red squirrels, smaller but quicker and more belligerent, showed up to forage amid the dropped peanuts and sunflower seeds on the deck.

The fireplace crackled and roared all day. We removed some of the fallen wood from the uncle’s yard and stored it in the garage for later fireplace duty.

Late in the day, tree-trimming trucks showed up and workers clipped limbs from around the nearby electrical wires. I went out to ask one of them if they knew when the power would be back on. “Maybe Monday or Tuesday,” the guy said. Ouch. I was enjoying this vacation from electricity, but not enough that I wanted it to go on much longer. Before I walked away, the apparently-better-informed driver leaned over and yelled “Later today!”

We drove up to the local Christmas-tree lot, operated by a friend, and visited for a bit, then further to the nearest Dunkin Donuts for cups of the sweet, candified murk that passes for coffee in these modern times.

Driving back, we both noticed power on in houses that had been dark. When we got back, whoo-hoo! Civilization had returned! The central heat was already returning the house from the high 40s to a more civilized 65 degrees.

Late that evening, Carl hissed at me again. “Hank! Coyotes!” They were huge, bigger than anything I’d seen out west. Red wolf alleles, Carl assured me. They were dark masses on the moonlit snow, convincing wolfy, pausing to inventory the local rabbit population, I guess. We watched them through binoculars for about 15 minutes.

Before they trotted off, the larger darker one we’d thought to be male squatted to pee. The smaller, lighter one we’d thought to be female lifted a leg. Carl had seen an even larger one in the past few days, which he figures must be the pack male. These two were a dark female, possibly the big guy’s mate, and a lighter young male, either an uncle or maybe the female’s near-grown pup. For now, these two are Maya Coyote and Uncle Charley to me.

A half hour later, a lone bunny sits in the middle of the snow-covered moonlit yard, in the exact spot the coyotes were standing and sniffing minutes before, and not far from where red and grey foxes roamed on previous nights. We see its small and apparently defenseless form starkly outlined in the snow, and we trade a few worried comments about its safety.

“Hey, he lives in the Knife Fight,” I finally say. “He has more experience at taking care of himself out there than we do.”

A minute or two later, the bunny vanishes into the dark brushy verge at the bottom of the hill, and we — fat and safe and rich — turn back to the light and heat of indoors.

[You can see bigger versions of these two pics on my Flickr site.]