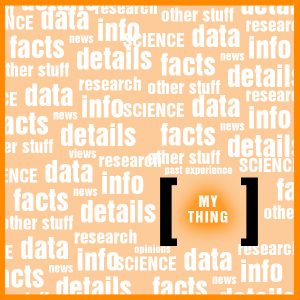 You’ll notice two main things. One is the pair of brackets with “My Thing” inside them. The other is a large space filled with other stuff, such as “data, info, facts, details, research, opinions, views, past experience, science.”

Imagine that the large space on the graphic, both inside and outside the brackets, is the universe of all possible information on some subject. Imagine further that the small space inside the brackets is that specific small body of detail I want to get you to focus on.

Whatever it is, it is right there inside the brackets, and it is there and only THERE I want you to focus. All that other stuff I want you to NOT notice.

If you noticed it, I might say “Oh, that stuff will only confuse you.  It’s bullshit, it’s lies. Besides, why do you need that? I’m telling you the stuff you really need to know. You know, the true stuff, the good stuff, the stuff that will change your life for the better. The stuff that OUR people believe, unlike the nasty stuff those ugly shits on the other side believe.” I might say “If you notice that other stuff, you hate women, you’re a commie and a traitor and you’re going to hell.”

But if I do my thing right, you WON’T notice the other stuff. Or if you do, you will automatically reject it all on your own.

Religion is a good example of this sort of thing. There’s this stuff inside the brackets — the Bible, the miracles, the soaring beauty of the chapel, the fuzzy details of glorious afterlife, the fellowship of the church, all the intense loving, tribal experience of your religion.

And outside the brackets is … everything else. Reality. Reason. Scientific facts. The undeniable conflicts of the various parts of the Bible, the historical inaccuracy, even the doubtfulness of the existence of Jesus himself. All the things atheists say. The fact that thousands of other religions exist, and that their followers all think they have the one right one.

If you notice the stuff outside, if you think about it … you maybe end up losing your religion. Giving it up. Seeing its limits and its mistakes and even its lies.

But if you stay safely inside the brackets, focused on believing what’s in there and ignoring all the other stuff, however much of it there is, you can continue to snuggle comfortably within the limits of your religion. Given that most of us are raised inside the brackets of religion, taught that only the stuff inside the brackets is true, and safe, and good, it’s not hard to see how so many of us stay in there.

The thing for an atheist such as myself, though, is that religion is the too-obvious Bad Guy. What other sorts of brackets present themselves to us in daily life?

More than you can ever imagine.  Products. People. Philosophies. Entertainment. Political parties. Even social justice movements.

Everything, EVERYTHING that someone wants you to believe, or agree with, or vote for, or buy, or devote your life and energies to, is presented to you via such brackets. Everything, EVERYTHING, presented to you for your approval or purchase is accompanied by a larger body of facts, details and data that really and truly exist, but that the seller (which may be someone you trust and love) hopes you won’t notice.

Suppose you become a faithful bracketeer, and you buy and agree with the stuff inside your favorite pair of brackets. You’re an ardent feminist, a devoted Chevy customer, a complete and total political Liberal. You’re a passionately driven hater of war, and Justin Bieber, and Ayn Rand. You’re a vegan, a lover of pit bulls, a defender of GMOs, a staunch union man, a great fan of tattoos and piercing.

Knowing the brackets exist, and that there’s a huge amount of stuff outside them that you’re comfortably not noticing, how do you feel about yourself? Probably in this moment, while you’re still reading this, you feel pretty good. Because hey, all that outside stuff is lies, right? Only tinfoil-hat crazies believe that shit. Besides, it’s irrelevant, because you’ve got the real stuff, the good stuff, the only stuff worth noticing and knowing.

But how about if you were once a great fan of Bill Cosby, or OJ Simpson? How about if you loved your stepfather for a thousand different reasons, but later found out he was steadily molesting your little sister for all the years she lived at home? Or you supported the Iraq War without reservation, but then lost your son because his Army-supplied body armor was substandard, and worse, that the Secretary of Defense knew it in advance? Or maybe you just loved the McRib, but then found out what was actually in it? How about if you learn that some of your most closely-held bracket loyalties were drastically, horribly wrong? Then what?

Of course you’ll be inclined to rethink previous loyalties and beliefs. But you still probably won’t notice the underlying phenomenon of brackets. Which — at least so I think — you MUST do.

But it won’t be easy. If you venture outside the brackets, if you even SEE the brackets, the bracketeers around you — MOST of the people you know — are not going to like you as much as they once did. You will make them uncomfortable. You will be suspect. You will be alien, and no longer quite safe to talk to.

But you’ll be yourself. ONLY yourself, and not just a subself of one sect or another of bracketeers.

If you care about that sort of thing, I mean. It certainly does feel GOOD to be a bracketeer among fellow bracketeers. You don’t have to do all that uncomfortable reading and noticing and thinking, and you never have to reach your own conclusions about stuff. You never have to work and strain to see what’s outside the brackets. You can feel safe and loved and accepted, and in comfortable full agreement with your leaders and spokesmen and fellow bracketeers — who you already know are truly good people.

All you have to do is never question, never think, never speak up, never — even in the privacy of your own mind — disagree. Buy the lottery tickets, get the tattoos, smoke the Marlboros, eat your kale, vote only for Democrats. And shut up.

Somewhere out there, I hope there are people energetic enough, thoughtful enough, contrary enough, but also kind enough, to think their own thoughts, reach their own conclusions, and share them freely with others. People who see the brackets, who venture outside them, and who accept the social consequences in a desire to be a better person in a better world.

I hope to know them.