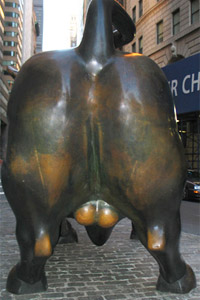 I had to struggle with myself to read the piece; the title alone clued me that it was going to be one of those right-wing shock jock bits, and I hate patronizing those people by listening. They always make me think of the kid who chews with his mouth open to gross out the little girl on the opposite side of the lunch table, and who later discovers he can make a living at it (Bill O’Reilly, Sean Hannity, Ann Coulter, etc.)

But I read it anyway.

I just watched “Fitna,” a 17-minute film by Geert Wilders, head of the Dutch Freedom Party, which takes a hard-line stance against Muslim immigration.

Released on the Internet on Thursday, “Fitna” juxtaposes verses from the Koran with images and speeches from the world of jihad. Heads cut off, bodies blown apart, gays executed, toddlers taught to denounce Jews as “apes and pigs,” imams calling for global domination, protesters holding up signs reading “God Bless Hitler” and “Freedom go to Hell” – these are just some of the powerful images from “Fitna,” an Arabic word that means “ordeal.”

Predictably, various Muslim governments have condemned the film. Half the Jordanian parliament voted to sever ties with the Netherlands. Egypt’s grand imam threatened “severe” consequences if the Dutch government didn’t ban the film.

Meanwhile, European and U.N. leaders are going through the usual motions of theatrical hand-wringing, heaping all of their anger on Wilders for sowing “hatred.”

So far Goldberg is just stating some facts, throwing in a bit of freedom-minded editorializing that I mostly agree with. But then he gets weird.

Me? I keep thinking about Jesus fish. […] In America, the easiest place to find this ancient symbol is on the back of cars. Recently, however, it seems as if Jesus fish have become outnumbered by Darwin fish. No doubt you’ve seen these too. The fish symbol is “updated” with little feet coming off the bottom, and “IXOYE” or “Jesus” is replaced with either “Darwin” or “Evolve.”

Eh. I don’t know if I’ve ever considered a Darwin fish a symbol of smugness. The times I’ve thought about getting one for my own truck, I’ve decided not to because of fear. Fear that my truck would be defaced by nice Christians out to make the point that I had no right to openly express non-Christian sentiments. I see the Darwin fish as a very minor rebellion against centuries of invasive Christian smugness.

The hypocrisy is even more glaring. Darwin fish are often stuck next to bumper stickers promoting tolerance or admonishing random motorists that “hate is not a family value.” But the whole point of the Darwin fish is intolerance; similar mockery of a cherished symbol would rightly be condemned as bigoted if aimed at blacks or women or, yes, Muslims.

Oooh, you build that straw man, Jonah. Yes, the “whole point of the Darwin fish is intolerance.” (Cough, cough.)

As an atheist (and one of the science-minded, even though I have no degree in science), I can tell you that I have felt the pressure of intrusive Christianity in my life about ten thousand times more than I have projected atheism or reason back into its face. How many times have I tolerantly bitten my tongue instead of answering back to unreason, proselytizing, lying, huckstering, pamphleting, even physical pursuit by nice Christians (and others) bent on forcing me to hear the Good News? Um, lots.

The clear position in which I have always found myself, even today when atheism is entering a phase of slightly greater self-assertion, is that of a minority member playing defense against an aggressive majority. I’ve lived all of my 55 years in a society permeated with Christianity, so much so that, for instance, I can’t even buy a piece of candy without simultaneously handing out a de facto Christian tract stamped with “In God We Trust.”

Living in the shadow of Christianity as I have, I’ve found it tolerable probably only because I didn’t know things could be any different. But looking back, clearly I’ve spent my entire adult existence hiding and keeping quiet about my freethinking, because I learned to fear, from a few nasty experiences, what would happen if I opened my mouth.

Anyway, here I am reading that the first faint stirrings of a freedom-minded social movement by the definite minority to which I belong – historically an extremely silent minority because you could get killed just for belonging to it – is an example of “intolerance.” The dark comedic irony is unsurprising, but still almost overwhelming.

Goldberg’s argument gets a bit stranger.

As Christopher Caldwell once observed in the Weekly Standard, Darwin fish flout the agreed-on etiquette of identity politics. “Namely: It’s acceptable to assert identity and abhorrent to attack it. A plaque with ‘Shalom’ written inside a Star of David would hardly attract notice; a plaque with ‘Usury’ written inside the same symbol would be an outrage.”

I confess to a mental double-take here. First, because this is not the first time I’ve heard such an argument. I’ve written in the past about people who really believe that if you don’t share their religion, you’re committing an assault on them.

But second because Goldberg equates the historically downtrodden Jews, with all the smears and attacks they’ve had to put up with, with the historically aggressive majority Christians – the very people who’ve done a lot of the historic down-treading of those same Jews.

Clearly to Goldberg it is atheists, yet another minority which quakes in the shadow of a powerful majority social and political and economic force, who are committing the heinous attack, and not the Christians.

But then Goldberg gets REALLY strange.

But the most annoying aspect of the Darwin fish is the false bravado it represents. It’s a courageous pose without consequence. Like so much other Christian-baiting in American popular culture, sporting your Darwin fish is a way to speak truth to power on the cheap.

Whatever the faults of “Fitna,” it ain’t no Darwin fish.

Geert Wilders’ film could very, very easily get him killed. (He’s already guarded around the clock.) It essentially picks up the work of Dutch filmmaker Theo van Gogh, who was murdered in 2004 by a jihadi for criticizing Islam.

“Fitna” is certainly provocative, yet it has good reason to provoke. A cancer of violence, bigotry and cruelty is metastasizing within the Islamic world.

It’s fine for Muslim moderates to say they aren’t part of the cancer; and that some have, in response to the film, is a positive sign. But more often, diagnosing or even observing this cancer – in film, book or cartoon – is dubbed “intolerant” while calls for violence, censorship and even murder are treated as understandable, if regrettable, expressions of well-deserved anger.

In the context of this article, the previous section is an astonishing application of doublethink. I can only think Goldberg either doesn’t know what he’s saying, or he believes his targeted readership is so stupid that it will swallow anything, no matter how weirdly opposite in meaning it is to the point he’s attempting to make.

He picks on minority atheists for displaying Darwin fish on their car bumpers, but then instantly gives an example in the Muslim world in which the exact same sort of minority protest-displays are potentially suicidal. Somehow he sees minority voices in the middle East as courageous, minority voices here as invasive, insulting … and gutless:

The Darwin fish ostensibly symbolizes the superiority of progressive-minded science over backward-looking faith. I think this is a false juxtaposition, but I would have a lot more respect for the folks who believe it if they aimed their brave contempt for religion at those who might behead them for it.

Yes. He says he’d respect atheists more if they faced beheading for displaying their Darwin fish, because that would show more guts.

So there, all you whiny atheist bitches. The world will be a much better place when you finally grow some balls, and also you should stop these ceaseless totalitarian attacks on the poor, mistreated Christians – the hapless, defenseless victims of the modern era – and let them have their Christian bumper fish in peace.

And stop smirking. I saw that.