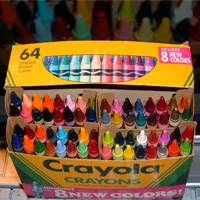 I couldn’t match Michelle, of course. Michelle was the little girl in my class – maybe in every class – who could color things perfectly. She was the Winslow Homer of coloring books, so good at coloring she wowed even adults.

I still remember the alien perfection of her coloring. She not only picked the right colors, she had this way of bearing down at the edges of each coloring block so that it gained a special brilliance. Under Michelle’s hand and eye, simple line drawings in coloring books took on a life beyond what their creators dreamed, leaping off the page at you in smooth chromatic brilliance. She even put in extras, added lines of shading or definition to give depth to the flat images of kittens and frogs and cowboys.

And whereas I, with my 5-year-old hand-eye coordination, sometimes slipped and let the waxy color wander over a line, when the Crayon was in Michelle’s hand, not an atom of color lapped over.

Worse, she wasn’t even snotty about it, so I don’t get to remember her as a nasty little brat. She was sweet, even generous, about showing others how she did what she did. (Pfft. Rotten little minx. Today she’s probably on the board of Crayola, or a member of the Presidential Commission on Coloring Books.)

Anyway, coming across that listing of all the crayon colors, I felt a moment of … hurt.

My family was poor. Not starving and freezing poor, but raggedy-ass hand-me-down poor. Occasionally even charity-case welfare poor. I never lacked for my own socks and shoes, but until I was 13 or so I don’t think I wore a single shirt or pair of pants that hadn’t been worn by one or both of my older brothers. My “rich” uncle once bought me a chemistry set for Christmas that cost all of $15, and I felt like I was king of the world for months after.

The relative poverty played out in other ways. Toys were all hand-me-downs, or Goodwill acquisitions, and even so, there weren’t many.

Which leads me to Crayons.

They came in different-sized boxes. Still do, in fact, but I’m relating the memories of the 5-year-old at the center of this memory.

There was the 8-crayon box, which anybody could afford. Crayola says “8 ct. Crayola Crayons are the classic kids’ art tool. They are the colors generations have grown up with — includes red, yellow, green, blue, brown, black, orange and purple!”

There was the 16-crayon box, which included the coveted gold, silver and copper. There was the 24-crayon box, and then 48, which moved into ethereal realm of colors called yellow-green and sky blue and flesh.

There was the 64-crayon box, which I think I saw only a handful of times in my entire life, so I can’t say what colors it contained.

The colors were ranked in disciplined rainbow rows in the huge box, like an invading Crayola army.

Only two kids I ever met had it. Michelle was one. (The other was a kid in the 6th grade, long after any of us really cared about such things, so he doesn’t count.)

The first time that box came to school, it nearly caused a riot. Unheeding Miss Calvert’s orders, we left our seats to crowd around and gawk. There were gasps. There were wows. Even fat old Miss Calvert waddled over to marvel.

When Michelle opened that box for the first time, a kind of glow emerged, something like really religious people might imagine emanates from holy shrines. It wasn’t just glorious, it was Glory itself. Thinking about it now, I even seem to remember a sound, the distant choral notes of a heavenly choir (although this may only be the constant tinny whine in my aged ears) that accompanied the opening of the full 96-crayon box.

A brand new box of 96 crayons, in untouched splendor. Pristine tips. Not a scratch, not a tooth mark. Perfect, unpeeled paper covers. Unbroken. And the colors! None of us dared touch them, but Miss Calvert and Michelle read off their names as the rest of us stood in stunned, slack-jawed silence. Periwinkle? Cerulean? We’d never even heard of them.

Eventually I went back to my desk and my own coloring book. I opened the page to the horse. I opened my own box of crayons. They were new and perfect, just as unbroken and unblemished as Michelle’s. But when I looked at my color selection, there was only red, yellow, green, blue, brown, black, orange and purple.

Sweet, wealthy Michelle might have colored her horse brick red or mahogany, desert sand or almond, but I had only brown.

The memory ends there. Surely I picked up the brown and started coloring, doing the best I could with what I had. Even at the age of 5, you know life doesn’t end just because it hurts. And there’s a hazy something in my head that suggests that later in the year, Michelle even lent out certain colors to special friends, and that once or twice I qualified to borrow her sunset orange, or silver, or even copper.

But carried unnoticed and unsuspected across half a century, there’s still a tiny little wound on the heart of that 5-year-old boy.

Being poor sucks. Certainly there are plenty of children in the world who have less, and the sensible-adult me of today well knows it.

But 50 years later, there’s a 5-year-old in me that still yearns, impossibly and hopelessly, after Crayola’s Big Box.

And I still have no idea what periwinkle looks like.