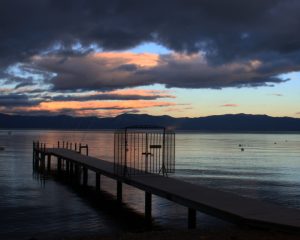 I was thinking today about large-scale social motion in a negative direction. Not as some sort of accident, but as the result of some deeper human sociological/psychological tides.

I think of bikers and biker culture. The skull motif so penetrates biker culture that it makes its way onto everything — bikes, t-shirts, leather jackets, bandanas, helmets, face masks, even tattoos. It’s interesting to me that this nihilistic image is of such unquestionable importance, and has no positive-direction counterpoint. (For instance, you don’t see Hello Kitty biker art, with the possible exception of the very rare joke.) And I think of bikers as early-adopters of the sort of darkness the skull represents.

But following in the footsteps of those early adopters, that darkness — the studied opposite of health, respect, sanity, goodness, love — has now entered the mainstream. Politics has it. The news media has it. Style has it. Music has it. We have it as tattoos, saggy-ass pants, piercings, trashy dress, repellent physical condition, the easy bile and bullying of online commenters, the vapidity of entertainment, all sorts of other data points, all a part of a powerful counter-culture that insists whatever majority culture we have had is a hate-filled, freedom-restricting malignancy — hell, even the admonition to maintain a good healthy weight is seen as a violent attack on a helpless victim class — and that everything which is NOT majority culture is good.

Currently, there is almost no human practice, however scary, low or disgusting, that someone will not instantly leap to defend, as if some vital issue of freedom is at stake — “People should be allowed to shit in public! It’s perfectly natural! Only a bunch of hateful prudes would say otherwise!” And one of the defensive weapons is the ever-ready “You shouldn’t judge people!” — an admonition that resonates with the opposition to having social or personal standards.

I actually saw the election of George W. Bush as a signifier of something dark going on below the surface of things, and it appears to me that that whatever-it-is is spreading, solidifying its grip and influence. It was almost irrelevant that it was George W. Bush specifically who got elected; anyone of his sort — intellectually dull, pompous, grandiose, incurious, shallow, self-absorbed — could have fit the bill. Because that was what we unconsciously wanted and needed in that moment.

The hate flowing like a firehose at President Obama — a genuinely intelligent, genuinely good man who has served as a target for spitting spite from the first moment he entered the public spotlight — is another data point. This dark whatever-it-is HAS TO attack a decent person, because it can no more tolerate his existence than disease can tolerate antibiotics.

The thing is, I don’t know where this thing is coming from. Like I say, it feels like something weirdly inevitable in this moment — a necessary product of certain factors arising out a confluence of human psychology and the progression of civilization itself. I feel like we made a wrong turn at some point, or started from poisoned initial conditions, but I can’t see what that turn is or those conditions are.

I worry that this whatever-it-is would be see-able by humans slightly brighter, slightly better, and that we’re missing it because we’re just us.

It also disturbs me to think that just-us is tragically unequipped to stop it, and that it will sweep over the human world, damaging everything, as we stand by and observe in busy impotence, always convinced some less-relevant, flavor-of-the-month factor — racism, sexism, ‘the patriarchy’, teabaggers, underpaid teachers, Republicans, Fox News, liberals, video games, Barack Obama, Hillary Clinton — is to blame.

The bright spot, to me — the hope — is a Venn Diagram that overlaps the several circles of atheism, reason and education, and an intelligent activism that spotlights these as the necessary foundation of any kind of real-world solution.