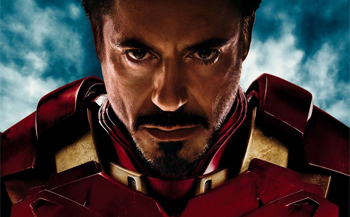 Got back from the Iron Man 3 premiere last night (as usual, I was the oldest person there) and my roomie asked me “Which was the best of the three Iron Man movies?” I had to mull that for a moment, but I finally said “I think it might be this one.”

Action. Oh, yes, a lot of it. Quite a bit of this movie is Tony Stark in action as himself, either without his armor or without all of it. There’s one great sequence where he has nothing more than one glove and one boot, and yet still manages to kick major ass with a group of terrorists.

The suits are on display in a big way, with one fight scene involving about 20 of them, all being operated by Jarvis. One remotely operated suit gets some play, and it’s a nice little surprise each time you discover Tony Stark is not actually in the thing.

Don Cheadle’s role as the armored Iron Patriot serves mainly as comic relief in his in-armor scenes, but he gets some good action stuff later as himself, Rhodie.

Regarding major-villain action, and the necessary suspension of disbelief to support it: Some of the villains have the ability to superheat parts of their bodies so they glow red, and are even able to melt iron by touching it. There’s a healing ability that goes along with it. I could diss the nature of this power, and I expect some reviewers will, but I won’t carp at it. I liked it – if nothing else, it was true to the superhero comics universe, where just about anything can happen, and with the flimsiest of real-world justifications. Also, I’m a grownup and understand I’ve just watched a movie about a comic book hero.

There’s an extended sequence where Tony Stark is stuck in a small town in Tennessee, working on his Iron Man armor in an old automechanic garage, that I liked very much, for two reasons.

First, the young actor who plays opposite Robert Downey Jr. is Ty Simpkins, who plays Harley Keener. I don’t dislike child actors, generally, but I don’t like them much either, because of how often they get a break in judgment of acting quality. “That’s pretty good for a kid” is a way of saying “Well, he sucked, but what can you do, he’s 12 years old.” Except in this case, his acting was spot-on perfect and professional, which is to say he looked perfectly natural as the 13-year-old (or whatever) he was playing.

Second, Tony Stark deals with PTSD. Downey does this incredibly well. There are about five scenes where he verges on psychological meltdown, and they are very, very good. One of them is a bedroom scene with Tony Stark sleeping next to Pepper Potts, and the expressions that trail across his sleeping face are wonderfully apt to the moment.

A couple of surprises: Both the identity of the Mandarin and an action sequence near the end involving Pepper Potts (By the way: Gwyneth Paltrow … damn. A fine actress. And whoo, also a serious hottie.) come as surprises, but they work. The way the story unfolds, you sort of suspect the possibility of Pepper’s action scene late in the movie, but the moment it happens still comes as a nice surprise.

Ben Kingsley was PERFECT as the Mandarin, both as his sinister in-character self and as his “other” self. The scenes with the “other” are … well, delightful. You’ll have to see it.

Jon Favreau as Happy Hogan is a nice addition, a little too-eager comedic, a little heroic, as in the previous movies. I can’t help but recall that Hogan in the Marvel universe has been both a wearer of Iron Man armor and an accidental super-powered villain. But this slimmed-down movie role works.

Look for the Stan Lee cameo at the big party (the flashback) early in the movie.

3D: I don’t dislike 3D, but I don’t actually like it all that much either. About 30 seconds into any 3D movie, I stop noticing it. There is no moment when I go “Wow, that shark CAME RIGHT OFF THE SCREEN!!!” I don’t think 3D adds anything to a movie but the price tag. I always feel vaguely screwed when I pay extra but get no more MOVIE. I recommend you go to the 2D version, and if you’re anything like me, I promise you’ll get just as much out of it.

Interestingly, there are some 3D previews before the movie that appear to use a different type of 3D. I wasn’t aware that there was more than one type, but the 3D glasses handed out at the movie definitely worked for the movie, definitely didn’t work for the previews.

Confession: I’m slightly embarrassed that I actually bought into some of the Mandarin’s rhetoric, and found myself hoping the character of the President (a white guy, by the way; I kept seeing him as George W. Bush, or alternate-universe President Romney) might get a good kick in the head, if not actually riddled with bullets. Sue me.

I had the feeling, as the credits began to roll, that this might be the last Iron Man movie, and I hope that’s not the case. Robert Downey Jr. nails the character, and I’d trade one Iron Man for every single damned one of those stupid Transformers movies.

Yes, stay for the credits and the short scene that follows. It’s a little nothing, but it’s funny, and worth seeing for the bragging rights, if nothing else.